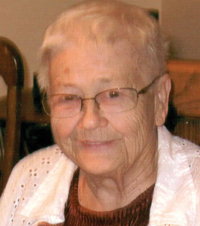 Eva Brewer of Medicine Hat, beloved wife of the late Don Brewer; passed away on Tuesday, March 7th, 2017 at the age of 90 years. Eva leaves to cherish her memory her children, Rainer Brewer and Sharon Hagel (Karl), both of Medicine Hat; three grandchildren, Stephanie (Devon) Bauer, Dianna (Shaun) Schmidt, and Michael (Sandra) Hager; several great-grandchildren and several great-great-grandchildren; daughter-in-law, Janet Brewer; dear friend, Gisele (Rene) LeClerc; as well as numerous nieces and nephews. Eva was predeceased by her husband, Don Brewer; her parents, Elphege and Rachel Des Rosiers; her son, Donald Brewer; and her daughter, Lorraine Bauer. Eva was born in Edmonton on August 1st, 1926 and was raised in the Black Diamond area. She met Don in Calgary and they were married in Toronto in April 1946 and Don’s Armed Forces work took them to many places in Europe and Eastern Canada. When Don retired, they settled in the Spruce Meadows area near Calgary. Eva and Don then moved to Tomawk, then Surrey, and finally settled in Medicine Hat in the late 1990s to be closer to family. Eva loved times spent with her family, friends, quilting, and keeping busy. She will be greatly missed and lovingly remembered by all. The Funeral Service will be held at SAAMIS MEMORIAL FUNERAL CHAPEL, #1 Dunmore Road SE, on Saturday, March 11th, 2017 at 9:30 a.m. with Gary W. Goran officiating. Memorial gifts in Eva’s memory may be made to the charity of one’s choice. Condolences may be sent through www.saamis.com or to condolences@saamis.com subject heading Eva Brewer. Funeral arrangements are entrusted to