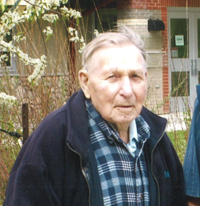 Arthur Deering of Medicine Hat, beloved husband of the late Lydia Deering, passed away on Thursday, March 9th, 2017 at the age of 95 years. Arthur leaves to cherish his memory his sons, Larry (Joan) Deering and Glen (Louise) Deering; his grandchildren, Denise, Dan, Derek, Sandon, Mark, Corrine, and Paul; as well as his daughter-in-law, Edie Gorzo. Arthur was predeceased by his wife, Lydia; his parents, John and Otillia Deering; his son, Raymond Deering; and his brothers and sisters, Roy, Walter, Robert, Fred, Richard, Alice Klaudt, and Katy Bohnet. Arthur was born and raised on the farm south of Irvine with his five brothers and two sisters. He married Lydia on November 6th, 1943 in Medicine Hat and they had three sons. Arthur owned his own farm of mixed farming and ranching. He will be greatly missed by his family and friends. A Graveside Service will be held in late summer 2017. Memorial gifts in Arthur’s memory may be made to the charity of one’s choice. Condolences may be sent through www.saamis.com or to condolences@saamis.com subject heading Arthur Deering. Funeral arrangements are entrusted to
SAAMIS MEMORIAL FUNERAL CHAPEL CREMATORIUM & RECEPTION CENTRE, “The Chapel in the Park” #1 Dunmore Road SE, Medicine Hat, AB T1A 1Z5 (403)528-2599 www.saamis.com inquiry@saamis.com Locally owned and directed CGR Holdings Ltd.