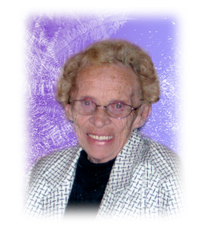 1922 ~ 2017
Mrs. Edith Irene Sparks passed away at the AgeCare Valleyview in Medicine Hat on Sunday, March 12, 2017, at the age of 94 years. Edith leaves to cherish her memory her two daughters, Maureen Moss and Karen (Barry) Charlton; grandchildren, Brenda (Mark) Smith, David Moss (Linda Cheong) and Branden Charlton (Elizabeth Nutting); great- grandchildren, Latasha (Ryan) Hazelet, Miranda (Justin) Pham, Carter, Mackenzie and Jordan; nieces and nephews as well as a special friend, Beverly Boylan. The family would like to thank the staff of AgeCare Valleyview for the tremendous loving care they provided to their mother. Edith was predeceased by her husband, Harold “Sparkie” Sparks; sister, Helen (Gordon) Anderson; son-in-law, Dennis Moss as well as several brothers and sisters-in-law. A Graveside Service will be held at Hillside Cemetery, Medicine Hat on Friday, March 17, 2017, at 11:00 a.m. with a reception to follow at Cook Southland Funeral Chapel, 901 – 13 Street S.W., Medicine Hat. Those wishing to attend the graveside service are asked to meet at Cook Southland Funeral Chapel at 10:45 a.m. (Condolences may be expressed by visiting our website at www.cooksouthland.com) Honoured to serve the family is
Cook Southland Funeral Chapel, 901 – 13th Street S.W. Medicine Hat, Alberta T1A 4V4 Phone 403-527-6455