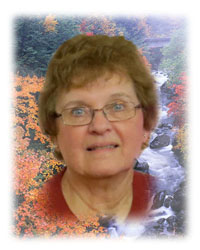 1939 ~ 2017
It is with broken hearts that we, the family of Shirley Marie Fode, beloved wife of 59 years to Frank Fode, announce her passing at the Medicine Hat Regional Hospital on Monday, March 13, 2017, at the age of 77 years. Along with Frank, Shirley leaves to cherish her memory two sons, Lynn and Neil (Pam); five grandchildren, Jeff (Kristy), Amber (Scott), Tyler, Courtney (Andrew) and Shayann (Jordan) as well as three great-grandchildren, Marley, Jack and Kinsley. She was predeceased by her parents, Walter and Margaret Young and her brother, Larry. Shirley was born in Medicine Hat on October 3, 1939 and attended Elm Street School where she met Frank in Grade 8. After grade 9, she went to Garbetts Business College where she graduated with honours when she was 15 years old. Shirley married the love of her life, Frank, when she was 17 and they raised their boys in Medicine Hat. During retirement, she enjoyed family trips, camping, spending time with her grandkids and developing her love of crafts. She enjoyed both Brazilian embroidery and quilting and has made many beautiful projects. She met with her quilting friends once a week where many friendships were made. A celebration of Shirley’s life will take place at Cook Southland Funeral Chapel, 901 – 13 Street S.W., Medicine Hat on Friday, March 17, 2017, at 3:00 p.m. with Life Celebrant Gerry Getz officiating. Interment will follow at Hillside Cemetery with a time of fellowship thereafter in the Cook Southland Reception Facility. (Condolences may be expressed by visiting our website at www.cooksouthland.com) Honoured to serve the family is
Cook Southland Funeral Chapel, 901 – 13th Street S.W. Medicine Hat, Alberta T1A 4V4 Phone 403-527-6455