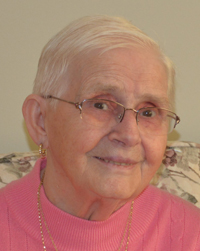 Anna Antonia Vullings of Medicine Hat, beloved wife of the late Gerard Vullings, passed away on Friday, March 17th, 2017 at the age of 85 years. Anna leaves to cherish her memory her children, Joanne (Randy) Jalbert, Mary (Tim) Kisinger, Leslie Vullings, Gerry Vullings, Murray Vullings, and Jim Vullings; and three grandchildren, Kevin Kisinger, Kelly Kisinger, and Christopher Jalbert. She also leaves two brothers and one sister in Holland; sisters and brothers-in-law; as well as numerous nieces, nephews, cousins, and good friends in Holland and Canada. Anna was predeceased by her parents, Antoon and Jacoba van Leendert; two brothers, one in infancy; and one sister. Anna was born in Holland on September 13th, 1931. She married Gerard on March 10th, 1956 in Holland before immigrating to Canada. Anna was happiest when she was cooking and baking. She loved knitting and crocheting and enjoyed time spent volunteering, especially at St. Joseph’s Home. Anna was a blessing as she made herself available whenever needed to care for Chris in his younger years. Unfortunately, Alzheimer’s Disease slowly took away her abilities. Those wishing to pay their respects may do so at SAAMIS MEMORIAL FUNERAL CHAPEL, 1 Dunmore Road SE, on Tuesday from 7:00 to 9:00 p.m. The Funeral Service will be held at SAAMIS MEMORIAL FUNERAL CHAPEL on Wednesday, March 22nd, 2017 at 11:00 a.m. with Father Tomy Manjaly officiating. Interment will take place at Saamis Prairie View Cemetery, 5160 Gershaw Drive SW, on Wednesday, March 22nd, 2017 at 1:30 p.m. Those wishing to attend are asked to meet at the cemetery. Memorial gifts in Anna’s memory may be made to a charity of one’s choice. Condolences may be sent through www.saamis.com or to condolences@saamis.com subject heading Anna Vullings. Funeral arrangements are entrusted to