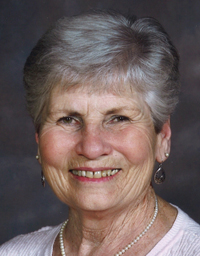 Beatrice “Bea” McCallum of Redcliff, beloved wife of the late James “Jim” McCallum, passed away on Sunday, March 19th, 2017 at the age of 78 years. Bea leaves to cherish her memory two sons, Brent (Monika) Besplug and Scott (Cathy) Besplug; three grandchildren, Matthew (Chelsey), Dylan (Katelyn) and Carley (Jeremy); three great grandchildren, Payton, Serenidy and Noah; one brother, Rick (Darren) Moore; two sisters, Jess (Cliff) Sackman and Helen Retelback; Jim’s children, Merle (Graeme) Wheeler, Ian (Jacqueline) McCallum, Kevin McCallum and Brian (Leonie) McCallum and their families; as well as numerous nieces and nephews. Bea was predeceased by her husband, Jim; her son, Warren Besplug; and her parents, Richard and Helen Moore. Bea was born and raised in Redcliff and worked at Canada Trust for many years. She was very dedicated to her church on Riverside and St. John’s Presbyterian Church. Bea enjoyed trips to the Redcliff Bakery with her coffee friends to have a lot of great laughs. She was instrumental in starting the quilting club, Bea’s Quilting Bees. Bea has a special connection to her daughter-in-law, Cathy and was like a second mother. She had a great love of dogs and birds and was a very caring woman to all, she had a sparkling personality and always put others before herself; Bea was a natural caretaker. Bea was a dedicated Granny to her grandchildren and great grandchildren and will be missed dearly by all her family and many friends. The Funeral Service will be held at ST. JOHN’S PRESBYTERIAN CHURCH, 504 – 2nd Street SE, on Monday, March 27th, 2017 at 1:00 p.m. with Reverend Dr. Nancy Cocks officiating. In lieu of flowers, memorial gifts in Bea’s memory may be made to the SPCA, 55 Southwest Drive SW, Medicine Hat, Alberta, T1A 8E8 or to the Canadian Cancer Society, 325 Manning Road NE, Calgary, Alberta, T2E 2P5. Condolences may be sent through www.saamis.com or to condolences@saamis.com subject heading Bea McCallum. Funeral arrangements are entrusted to