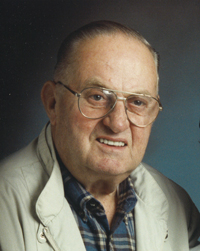 Libertus “Bert” Arend Wynand Bouman, aged 91, passed calmly on Sunday, March 26th, 2017, under the compassionate care of the staff at Haven Care Centre. Bert leaves behind his wife of 62 ½ years, Johanna (Hans) Bouman; his daughters, Joanne DeJong (Jay), Bernice Bouman (David Peacock), and Audrey Bain (Bruce); and his son, Harry Bouman. Bert was “Opa” to eight grandchildren, Mike, Erica, Anita, Cory, David, Ian, Jennifer and Clinton; and Great “Opa” to Jaxon, Journey, Mallory, Luca, Rex and one more soon to arrive. He was predeceased by his younger brother, Henk Bouman. Bert was born on January 25th, 1926 in Groningen, the Netherlands, and grew up in Apeldoorn. He fought with the “Resistance”, served in the Dutch East Indies, and later worked in import and export in Indonesia. After returning home, Bert decided to begin a life in Canada. He was sponsored by a friend from the war (Mr. Rex Hazelaar) and soon after convinced Hans to come over and marry him. Bert had many occupations in those early years, but for ten of them, they raised their family in the Sargeant’s Mess where the couple tended bar. Bert worked as a custodian at Medicine Hat College and finally retired in sales from Freddie’s Paint & Wallpaper. The Bouman family grew close to other Dutch families (Hazelaar, Vonk, Van Erde, Falk) and Bert and Hans became members of the Legion and the Dutch Canadian Club. Bert, however, preferred being in his own home beside his wife. The family would like to extend their sincere thanks to Helen Santer (RN) and the thoughtful staff at Haven Care Centre, their physician, Dr. Monty, and all of their friends for their support. The Funeral Service will be held at WUERFEL AUDITORIUM, 1720 Bell Street SW, on Thursday, March 30th, 2017 at 2:00 p.m. with Pastor Bob Findley officiating. Family and close friends are invited to Saamis Prairie View Cemetery immediately following the funeral service. Those who would like to join the family can have the opportunity to “Toast Bert” at the Medicine Hat Legion Canteen at 4:00 p.m. Condolences may be sent through www.saamis.com or to condolences@saamis.com subject heading Bert Bouman. Funeral arrangements are entrusted to
SAAMIS MEMORIAL FUNERAL CHAPEL CREMATORIUM & RECEPTION CENTRE, “The Chapel in the Park” #1 Dunmore Road SE, Medicine Hat, AB T1A 1Z5 (403)528-2599 www.saamis.com inquiry@saamis.com Locally owned and directed CGR Holdings Ltd.