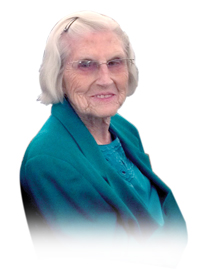 1924-2017
The light in her eyes has faded but her beautiful soul will live on. With her daughters by her side, Estelle Francis Cartwright walked through heaven’s gate and into her Father’s loving arms on the beautiful afternoon of March 27, 2017.
In her 93 years, Estelle spent her days living life on her own terms, with a fierce devotion and love for her family and her faith.
Her memory will live on in her four children Mardi (Larry) Hamel, Claudia (Rick) Goodyear, Tom and David Cartwright; her grandchildren Ryan Goodyear, Kerri (Jeff) Sandford and Shannon Goodyear; her great-grandchildren Charlatan and Bokken Sandford, Hunter Goodyear, Hayden and Aspen Chaney and Sheldon Hamel.
Estelle is predeceased by her parents Joseph and Rose O’Leary, her husband Wilbert (Webb) Cartwright, her nine brothers and sisters and Katie Goodyear.
Born in Niagara Falls, Ontario, on January 15, 1924, Estelle was one of 10 children born into the O’Leary clan. Theirs was a close family, bonded in love for each other and the Catholic Church.
Following the end of WWII, Estelle would begin on a new adventure when she met a dashing, young soldier wearing a fedora. On May 24, 1947, Estelle married the love of her life, Wilbert Cartwright. The two settled in a little house on Frederica Street in Niagara Falls, where they would welcome and raise their four children.
Mardi, Claudia, Tom and David were Estelle’s greatest treasures. Years later, three tiny children would capture her heart. Ryan, Kerri and Shannon were Estelle’s shining stars. Her grandchildren meant the world to her and she became the world to them.
In her final years, Estelle would become a great-grandmother, a title she wore with the greatest pride and the most welcoming heart. Estelle’s legacy will now live on in the hearts of these adoring children.
At 90, a new adventure awaited her. Estelle moved from her life-long home in Niagara Falls to Medicine Hat.
Her zest for life would be admired by all who met her. Estelle was known to not let her ailing health slow her down. She became everyone’s “sweetheart”.
As her final days neared, Estelle smiled through her pain and continued to be the strongest person in the room.
With a final “I love you”, she closed her beautiful blue eyes and with a smile said “Goodbye”.
It is her wish that we honour her life with celebration and not sadness. She has gone home and is at peace.
The life of Estelle Francis Cartwright will be celebrated on Friday, March 31 at 11 a.m. at Holy Family Parish.
Internment will be at a later date in Niagara Falls, Ontario.