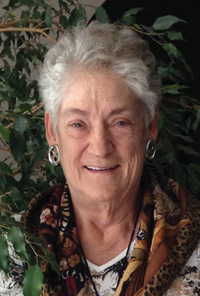 It is with heavy hearts that we announce the passing of our mother, grandmother, sister and friend, Ona Gayle (Champney) (Smyke) Dunbrack. Ona was born in 1939 to Arnold and Ethel Champney and passed away March 26, 2017.
Ona was raised on a farm outside of Fort McLeod, Alberta near the small town of Orton with her three siblings Rita Binning (deceased), Arlene Litchfield and Lauchie Champney.
Ona Gayle is predeceased by her first husband (Buddy) Bud Smyke of Lundbreck, AB. Ona was lucky enough to remarry to Lloyd Dunbrack of Pincher Creek, AB who passed away in 1998. Bud and Ona’s children are: Crystal Smyke, Byron (Roxanne) Smyke, Kerry (Dawn Heerschap) Smyke, and Klayton Smyke; Ona’s grandchildren are: Carleen, Nikki, Rayne, Jess, Alisa, Blaise, Joel, Dezmon, Kaiden, and Aaryn Smyke, and Kyla, Katie and Kataya McClung
Ona was a “Tupperware” Manager for 29 years and enjoyed her job to the fullest. Ona’s love for her family was of the upmost importance as her family was her life. She loved gardening and would often be found “out admiring my kingdom”. Ona had a way about her that would always put a smile on your face. She loved music and dancing or, as she would say, “cutting a rug”. When she wasn’t spending time with her family or gardening, she could be found in her craft room sewing, painting ceramics, making dolls, quilting, and much more.
Family and friends are invited to pay their respects from 10:00 am until 10:45 am, at the funeral service being held at The Church of Jesus Christ of Latter-day Saints, (1240 Wentworth Avenue, Pincher Creek) on Tuesday, April 4, 2017 at 11:00 AM. Interment will take place at the Orton Cemetery.
Those who wish can make memorial donations to the Canadian Diabetes Association, (220 6223 2nd Street SE, Calgary, AB T2H 1J5) or Dialysis Unit C/O Crowsnest Pass Health Foundation, (Box 455, Blairmore, AB T0K 0E0.)