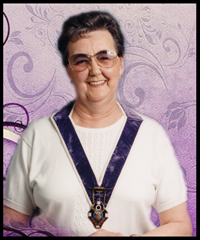 Margaret Duxbury passed away at the Medicine Hat Regional Hospital on Wednesday, March 29, 2017, at the age of 89 years. Margaret was born December 28, 1927, the eldest daughter of Rupert and Elizabeth (Libby) Cann. She attended school in Redcliff and later went to Garbutt Business College in Medicine Hat. Throughout the years she worked at Dom Glass and Town Hall in Redcliff, Woolworth in ladies retail, the local drug store and managed her father’s grocery store for a short time. She married Bill at St. Ambrose Anglican Church in Redcliff in October of 1971 and he passed away a short time later in March of 1973. Margaret was a dedicated member of the Ladies of the Royal Purple for a remarkable 50 years, on the Drill Team for 20 years and was a past Honoured Royal Lady over the years and a very active member. Gardening was a hobby she truly enjoyed as she tended to her flowers. She also liked spending time on the patio visiting with her friends. Margaret is survived by one sister, Betty Jean Kaufman of Redcliff; a brother Bill (Helga) Cann of Lethbridge; two nephews, Stuart Kaufman of Medicine Hat and D’Arcy Cann of Lethbridge; a niece, Angela (Calvin) Lunseth of rural Seven Persons; four great-nieces, Jennessa and Tasia Kaufman and Hayley and Tori Lunseth as well as many good friends. Besides her husband Bill, She was predeceased by her father and mother in April and May of 1987; a brother-in-law, Mainus Kaufman and Frank and Mollie Duxbury. In honouring Margaret’s wishes, a Private Graveside Service will be held at the Redcliff Cemetery on Monday, April 3, 2017, with Life Celebrant Gerry Getz officiating. (Condolences may be expressed by visiting our website at www.cooksouthland.com) Memorial donations in Margaret’s name may be made directly to the Elks and Royal Purple Fund for Children, 100 – 2629 – 29th Ave. Regina, Saskatchewan, S4S 2N9. Honoured to serve the family is