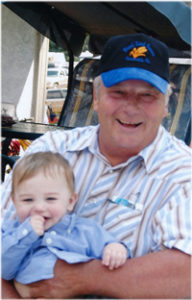 It is with broken hearts that we, the family of the late Mr. Robert James “Jim” Culver, beloved husband of Rhonda, announce his passing on Friday, March 31, 2017, at the age of 65 years. Along with Rhonda, his loving wife of over 42 years, Jim leaves to cherish his memory: two sons, Randy (Haley) and beloved grandchildren, Sierra and Chase; Jason (Beth); siblings, Linda (Willie) Andruschak of Hays, Dianne (Gary) Secrist of Enchant, Joanne (Keith) Olson of Coaldale, Terry (Ken) Franz of Retlaw, Jack (Kathleen) Culver of Sparwood, B.C., Jerry (Daralee) Culver of Medicine Hat, Rocky (Michelle) Culver of Elkford, B.C., Samantha (Randy) Colmer of Sparwood, B.C., Ronda Culver of Lethbridge and Tracey Culver of Surrey, B.C.; in-laws, Ken (Janet) Whitmore of Taber, Shirley Meier of Hays and Monty (Trudy) Whitmore of Taber. Jim is also survived by 23 nephews, 30 nieces, 21 great-nephews, 22 great-nieces and 5 great-great-nephews. He was predeceased by his father, Joe Culver and mother, Thelma Culver. Jim met and later married Rhonda Whitmore on October 4, 1974. Together they farmed and owned and operated Culver Construction Ltd. in Retlaw, AB., while raising their two sons. In 2009, Jim and Rhonda moved to Medicine Hat where he continued to enjoy spending time with his friends at the Royal Canadian Legion in both Vauxhall and Medicine Hat. Jim loved his family and time spent with his precious grandchildren. He also always made time for his nieces and nephews whom he held very dear. Jim’s life will be honoured and his memory cherished without the proceedings of a formal funeral service. The family welcomes friends to visit the house to share memories and stories in the coming days. If friends so desire, memorial donations in Jim’s name may be made directly to the Vauxhall Regional Fire Department c/o MD of Taber, 4900B – 50 Street, Taber, Alberta, T1G 1T2, an organization that was near and dear to Jim’s heart with Jim Culver Construction Ltd. being a driving force in constructing it. (Condolences may be expressed by visiting our website at www.cooksouthland.com) Honoured to serve the family is