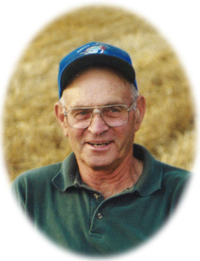 Gerald “Jerry” Kenneth Wright, beloved husband of Gloria Wright of Medicine Hat, passed away on Monday, April 3rd, 2017 at the age of 78 years. Jerry also leaves to cherish his memory his children, Lynne (Neil) Windjack, Barry Wright, Art (Cheryl) Wright, and Lori Wright; seven grandchildren; ten great-grandchildren; a sister, Gladys (Jerry) Hunt; two sisters-in-law, Liz Wright and Linda Fischer; a brother-in-law, Henry Bergen; and over fifty nieces and nephews. Jerry was predeceased by his parents, Roy and Mary Wright; five brothers and four sisters. Jerry was born on November 27th, 1938 at Gull Lake, Saskatchewan, the eighth child in a family of eleven. In 1958, Jerry married Gloria Barsness and they farmed in the Webb area, spending many winters in Arizona until finally retiring to Medicine Hat in 1999. Jerry had a great sense of humour and was a kid at heart, always ready for a game of something with the family. The Funeral Service will be held at ST. BARNABAS ANGLICAN CHURCH, 635 – 4th Street SE, on Friday, April 7th, 2017 at 11:00 a.m. with The Reverend Dr. Oz Lorentzen and The Reverend Canon D. Gene Packwood, co-officiating. In lieu of flowers, memorial gifts in Jerry’s memory may be made to the Carmel Hospice, St. Joseph’s Home, 156 – 3rd Street NE, Medicine Hat, Alberta, T1A 5M1. Condolences may be sent through www.saamis.com or to condolences@saamis.com subject heading Jerry Wright. Funeral arrangements are entrusted to