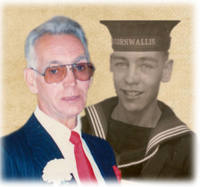 Robert Joseph McKenna passed away peacefully in Medicine Hat at the age of 82 years. Along with Joan, his loving wife of 62 years, Bob leaves to cherish his memory: children, Shelli, Greg, Darren, Barry (Sherri) and Bruce (Wanda); grandchildren, Tanis (Sheldon), Bailey (Johnny), Brayden, Kyle (Caitlin), Brennen (Ashley), Nicole (Robin), Riley, Robert, Kaylea (Owen), Ty (Hailey), Chasen, Kaycee and Tami; numerous great-grandchildren; brother, Eugene as well as numerous nieces and nephews. Bob was the youngest of 9 boys born to William and Elizabeth McKenna. He was schooled in Lethbridge, Swift Current and Empress. Following school, Bob joined the Royal Canadian Navy. After his service, he lived in Vancouver, BC., before settling in Lethbridge where he met Joan Lavonne Tollestrup. They were married on November 29, 1955. In 1961, Bob and Joan moved to Medicine Hat where he resided until his passing. Bob held the position of Purchasing Agent for Knight Schmidt Industries for 25 years. After a short career at Acklands, Bob retired to pursue his passions of hunting, fishing and the outdoors. In 2009, Bob was awarded a Lifetime Membership with the Medicine Hat Fish and Game Association where he spent countless hours on various projects for the Association. In his earlier years, Bob devoted most of his free time to minor sports. In Little League Baseball, Bob coached, umpired, was president of Medicine Hat Little League and held the position of District Administrator of Little League Canada. In minor hockey, Bob coached, sometimes more than one team in one season, refereed and was on the Executive Board of Minor Hockey. Best remembered is Bob’s beloved Tiny Mite team, the “Goodyear Rangers”, which he coached for 36 years. He also found time to work the Medicine Hat Tiger games as scorekeeper. Bob was awarded the Order of Merit from the Government of Canada in 1988, for grateful recognition of his contributions to his community. In life, Bob’s greatest passion was hunting, fishing and camping with his family and friends. He was a loving husband, devoted family man and will be sadly missed by those who had the good fortune to know him. The family would like to thank Dr. Mastel and his staff for the care and compassion that they provided to their father for many years. Bob’s life will be celebrated at Cook Southland Funeral Chapel, 901 – 13 Street S.W., Medicine Hat on Saturday, April 8, 2017, at 2:00 p.m. with Major Murray Jaster officiating. A time of fellowship will follow thereafter in the Cook Southland Reception Facility. (Condolences may be expressed by visiting our website at www.cooksouthland.com) In lieu of flowers, if friends so desire, memorial donations in Bob’s name may be made directly to the SPCA, 55 Southwest Drive S.W., Medicine Hat, Alberta, T1A 8E8, or to the Medicine Hat Fish and Game Association, Box 883, Medicine Hat, Alberta, T1A 7G8. Honoured to serve the family is

One Condolence for “BOB MCKENNA”