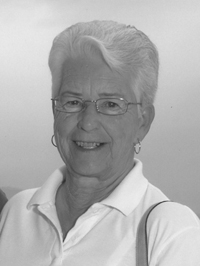 Marlene Ruth Chomin, beloved wife of Kenneth Chomin of Medicine Hat, passed away on Monday, April 3rd, 2017 at the age of 80 years after a battle with cancer. Marlene also leaves to cherish her memory three children, Darcie (Alan) Wilson of Midland, Michigan, Kevin (Brenda) Chomin of Vernon, BC, and Dwayne (Tracy) Chomin of Edmonton; six grandchildren, Jacquelyn (Ryan), Ryan (Gabrielle), Andrea, Scott, Matthew (Madeline), and Nicole (Trevor); six great-grandchildren; and one brother, Danny Smith of Walsh. Marlene was predeceased by her parents, Ronald and Ruth Smith; and one sister, Sharon. Marlene was born on January 27th, 1937 in Meadow Lake, Saskatchewan and was raised in Mossbank, Saskatchewan. The family settled in Moose Jaw where Marlene received her education and met her future husband, Ken. They were married in Moose Jaw in 1957 and then settled in Calgary where Ken was employed with Imperial Oil. They were transferred to Redwater, and then Fort St. John, with a final move to Medicine Hat. Marlene was an avid gardener and enjoyed craftwork, walking, skating, golfing, and playing crib. She loved train sets, traveling, and was a loyal Tigers fan, and she enjoyed spending time with her family and friends. A Private Family Time of Remembrance will be held. Memorial gifts in Marlene’s memory may be made to the charity of one’s choice. Condolences may be sent through www.saamis.com or to condolences@saamis.com subject heading Marlene Chomin. Funeral arrangements are entrusted to