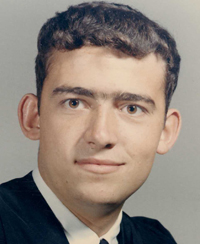 After a long and hard-fought battle with cancer, Gord passed away with his family at his side. Gord was born May 9, 1950, in Medicine Hat, Alberta. He was raised in Redcliff and attended grades 1-9 there. He went to Medicine Hat High School for grades 10-12. After high school Gord spent several years deciding what he would do with his life, and developing lifelong friendships in the process. He worked as a lifeguard, a trainman on the CPR, and in a sawmill. Gord’s decision to become a doctor was surprising, but once made, he threw his considerable ability into the effort. He attended Medicine Hat College for two years, and then medical school at the University of Toronto. Gord interned in Victoria, B.C. He married Kathy, and they settled in Roseburg, Oregon. There they raised three daughters, and Gord developed a successful medical practice. More recently, Gord and his new life partner, Teresa, lived in Las Vegas for two years, and in Australia for three. When Gord learned of his severe illness, he researched the location of the best hospital for treating leukemia. With help from his brother Dave, and sister Beth, Gord medevac’d to the Mayo Hospital in Phoenix. He spent the final year of his life surrounded by his family as he persevered in a struggle to overcome his disease. Gord is survived by his three daughters, Jennifer, Amanda (Dan), and Laura, and their mother Kathy. His partner, Teresa Remington, and her son Kyle, also survive him. Gord is also survived by his siblings Dennis (Brenda), Kenneth (Diana), Beth (Byron) and Dave (Liz), as well as a close cousin Al Grose, Aunt Ruth, and numerous nieces and nephews. His parents, Norm and Anna Rose, as well as his grandparents, Fred and Ella Jorgenson and Archie and Lily Rose predeceased him. A nephew, Shane Dreger, also predeceased him.

A family memorial will be held when Gord’s ashes are spread by his daughters, siblings, Teresa and Kathy, into the Gulf of Mexico; one of his favorite places on earth.