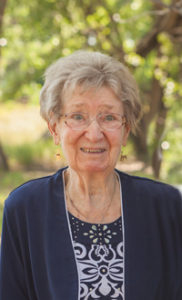 Kathleen Marie (Kay) Purcell (nee Gray) of Medicine Hat, loving wife of the late George Purcell, passed away quietly at home on Thursday, April 6th, 2017 at the age of 86 years. She was predeceased by her husband, George; one sister, Enid Allen; and one brother, Bob Gray. Kay is survived by her sisters, Joan MacIntosh and Reita Wilson; step-brother, Jim (Liz) Kitch; and sister-in-law, Audrey Gray. Kay was born on July 31st, 1930 in Margo, Saskatchewan to Ted and Mary Gray and grew up in Flin Flon, Manitoba. After joining the RCAF, Kay was posted to North Bay, Ontario where she met and married the love of her life, George Purcell. Together they travelled wherever the military sent them including France, Germany and much of Canada, accompanied always by a friendly feline. Kay was an avid curler, both in Canada and in Europe and first learned to golf in Germany with an instructor who was very dismayed to learn that she golfed left handed and no amount of instruction was going to change that. During their long stay in Ottawa, Ontario, Kay carved out her own career with Bell Canada retiring with George to Medicine Hat in 1990. Upon retiring she and George threw themselves into golfing, travelling the world, and their commitment to their church. Once widowed, Kay continued to travel, including a trip to the Holy Land with her sister, Reita and cruising to Alaska, Europe and the Caribbean with Lance and Gail. Kay always made the welfare of the most vulnerable in her community her first priority, knitting mittens, hats and prayer shawls with other members of her church and supporting the Medicine Hat SPCA, Medicine Hat Women’s Shelter and the Save the Children Fund. She will be dearly missed and fondly remembered by her cat, Tassie, her friends, her community and the multitude of loving nieces and nephews from both the Gray and Purcell families. The Funeral Service will be held at SAAMIS MEMORIAL FUNERAL CHAPEL, 1 Dunmore Road SE, on Monday, April 10th, 2017 at 2:00 p.m. with Dr. David J. Carter officiating. Interment will follow at Saamis Prairie View Cemetery. In lieu of flowers, memorial gifts in Kay’s memory may be made to the Medicine Hat SPCA, 55 Southwest Drive SW, Medicine Hat, Alberta, T1A 8E8, or to the Medicine Hat Women’s Shelter, (Phoenix Safe House), P.O. Box 2500, Medicine Hat, Alberta, T1A 8G8. Condolences may be sent through www.saamis.com or to condolences@saamis.com subject heading Kay Purcell. Funeral arrangements are entrusted to
SAAMIS MEMORIAL FUNERAL CHAPEL CREMATORIUM & RECEPTION CENTRE, “The Chapel in the Park” #1 Dunmore Road SE, Medicine Hat, AB T1A 1Z5 (403)528-2599 www.saamis.com inquiry@saamis.com Locally owned and directed CGR Holdings Ltd.