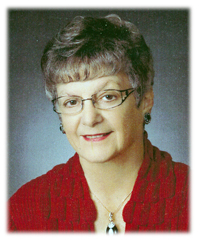 1934 ~ 2017
With heavy hearts the family of Elsie Charnetski, beloved wife of the late Nicholas Charnetski, announce her passing at the Medicine Hat Regional Hospital on Wednesday, March 29, 2017, at the age of 83 years. She leaves to cherish her memory one brother, Larry (Marie) Ewanyshyn; granddaughters, Kristin (Brennan) Somerville, Jinnian Bews; grandsons, Jefferey (Melanie) Charnetski, Chris Charnetski, Darren (Jennifer) Bews; daughter-in-law, Melonie Charnetski; son-in-law, Craig Bews; great-granddaughter, Emma Jane as well as numerous nieces and nephews. Elsie was predeceased by her husband of 55 years, Nicholas in 2007; daughter, Connie Bews in 2003; son, James in 2015; sister, Ollie Coyes, sisters-in-law, Vera and Margaret Charnetski and Lillian Bohonis. Elsie was born at Cudworth, Saskatchewan on March 20, 1934. Elsie and Nicholas were married in Saskatoon on October 11, 1952. They farmed at Prelate, SK until their retirement when they moved to Medicine Hat in 2002. They enjoyed many winters in Arizona and California, as well as travelling to various parts of the world; summers at the farm, camping and boating with the family. Elsie’s life will be celebrated at Cook Southland Funeral Chapel, 901 – 13 Street S.W., Medicine Hat on Tuesday, April 11, 2017, at 10:00 a.m. with Life Celebrant Gerry Getz officiating. Interment will take place later in the afternoon at Prelate, Saskatchewan. Memorial donations in Elsie’s name may be made directly to the charity of one’s choice. (Condolences may be expressed by visiting our website at www.cooksouthland.com) Honoured to serve the family is
Cook Southland Funeral Chapel, 901 – 13th Street S.W. Medicine Hat, Alberta T1A 4V4 Phone 403-527-6455