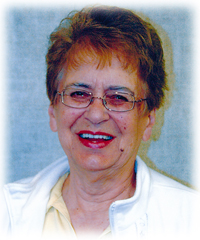 1937 – 2017
Mrs. Alma Brown, beloved wife of the late Bob Brown, passed away peacefully while surrounded by her family at the Medicine Hat Regional Hospital on Saturday, April 8, 2017, at the age of 80 years. Left to cherish Alma’s memory are her children, Barb (Wayne) Ramsay and Greg (Trish) Brown; grandchildren, Ashley, Morgan and Jaxon Brown; sister, Yvonne Wagner and sisters-in-law, Shirley (Ross) Zuehlke and Bernice Wagner. Alma was predeceased by her husband, Bob; daughter, Corinne; grandson, Josh and brother,â€ˆDale. Alma was born on March 7, 1937, in Kamloops, BC., and was raised in Eatonia, SK. She moved to Medicine Hat where she roomed and boarded in the Brown family house. Little did Alma know that this is where she would meet the love of her life, Bob Brown. They enjoyed 46 wonderful years together before Bob passed away in December of 2004. Together they raised their family, owned a farm and ran their own electrical business. She enjoyed spending time at the family cabin in Elkwater and going for coffee with her many friends. Alma’s favorite past time was spending time with her family, especially her grandchildren whom she adored. Those wishing to pay their respects may do so at Cook Southland Funeral Chapel, 901 – 13 Street S.W., Medicine Hat on Friday, April 14, 2017, between 2:00 p.m. and 3:00 p.m. Interment will take place at the Redcliff Cemetery on Saturday, April 15, 2017, at 1:00 p.m. The Celebration of Alma’s life will follow at Cook Southland Funeral Chapel, at 2:00 p.m. with Reverend David Carter officiating and a time of fellowship thereafter in the Cook Southland Reception Facility. (Condolences may be expressed by visiting our website at www.cooksouthland.com). If friends so desire, memorial donations in Alma’s name may be made directly to the SPCA, 55 Southwest Drive S.W., Medicine Hat, AB., T1A 8E8; Samaritan’s Purse Canada, 20 Hopewell Way N.E., Calgary, AB., T3J 5H5 or to the Medicine Hat and District Health Foundation, 666 – 5 Street S.W., Medicine Hat, AB., T1A 4H6. Honoured to serve the family is
Cook Southland Funeral Chapel, 901 – 13th Street S.W. Medicine Hat, Alberta T1A 4V4 Phone 403-527-6455

One Condolence for “ALMA BROWN”