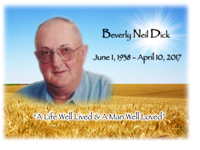 June 1, 1938 – April 10, 2017
Bev’s life was cut short following an unexpected and severe stroke. While surrounded by his loving family, Bev passed away at the Foothills Hospital in Calgary on Monday, April 10, 2017, at the age of 78 years. Along with Joyce (nee Hayne), his loving wife of over 60 years, Bev leaves to cherish his memory three children and their families: son, James (Cheryl) and their three children, Jason (Karen) and their kids, Aiden and Ella; Angela (Julian) Regino and their baby on the way; Cory (Adriane) and their daughter, Thea; daughter, Cynthia Rattai and her four children, Jordan Rattai(Kendra Wertz) , Taylor Rattai, Mackenzie Rattai (Lynn Doerksen) and Nolan Rattai as well as their father, Dan Rattai; son, Vallen Dick (Tage) and their two children, Falynn (Cory) Holt and their son, Brenton and Kaitlynn Dick. Bev is also survived by three brothers and three sisters as well as numerous nieces and nephews. He was predeceased by his parents, Phillip and Elizabeth Dick as well as two brothers and three sisters. Bev was born, raised and received his education in Carseland, Alberta. He worked his entire life in the Agriculture Industry. Bev was employed with Massey Ferguson for over 16 years and jointly owned Hat Farm Supply and Cypress Farm Supply for 20 years while farming with his son, James, up until last Friday. Bev was a very caring and loving husband, father, grandfather and great-grandfather. He had a heart… as big as it gets! Up until carpal tunnel health issues, Bev was an avid and award winning trap shooter. He loved the outdoors and spent many hours with Jim out at the farm. Bev was good in the kitchen and took great pleasure in making his dill pickles and also canning peaches and making borscht. He bragged about his cooking and if you didn’t eat it, you were in trouble! He made sure that he never missed an important event or game for any of the grandchildren and later, the great-grandchildren. He encouraged them to do their best and to always have fun.Hammie (pet cat) and the rest of us will truly miss you Pa! Bev loved the color yellow and his many good friends will certainly remember his yellow John Deere pants. Please wear yellow on Tuesday! A Celebration of Bev’s life will be held at Cook Southland Funeral Chapel, 901 – 13 Street S.W., Medicine Hat on Tuesday, April 18, 2017, at 1:00 p.m. A private interment will take place in Hillside Cemetery at a later date. (Condolences may be expressed by visiting www.cooksouthland.com) Memorial donations in Bev’s name may be made to the Calgary Stroke Program c/o Calgary Health Trust, 800 – 11012 MacLeod Trail S.E., Calgary, Alberta, T2J 6A5. Honoured to serve the family is
Cook Southland Funeral Chapel, 901 – 13th Street S.W. Medicine Hat, Alberta T1A 4V4 Phone 403-527-6455

One Condolence for “BEVERLY NEIL DICK”