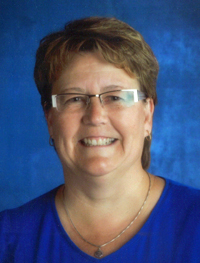 Denise Helene McDougall, beloved wife of Gary McDougall, passed away on Wednesday, April 5th, 2017 at the age of 56 years. Denise also leaves to cherish her memory three children, Brennan McDougall (Kimberlee Berger) of Calgary, Ashley McDougall (Jeff Wahl) and Brittney McDougall (Tanner Walters), both of Cypress County; one brother, Allan Larochelle; one sister, Lisa (Alden) Seib; two brothers-in-law, David (Margaret) McDougall and Bob McDougall; nieces and nephews, Danielle, RJ, Austin, Aubrey, Jensen, Brady, Sydney, Jaycee and Jennifer; as well as her step brothers and step sisters, Paul (Patty) Vallee, Pauline (Pat) Zender, Guy (Marla) Vallee, and Peter Vallee. Denise was predeceased by her parents, Leo Larochelle and Therese Vallee; her step dad, Claude Vallee; and her in-laws, Lil and Dave McDougall. Denise was born in Ponteix, Saskatchewan. Later, as a young girl, she moved to Swift Current with her mother, Terry and siblings, Allan and Lisa for the remainder of her childhood. She then attended Medicine Hat College and the University of Lethbridge graduating with a Bachelor of Education degree. Her teaching career began in Medicine Hat at Ross Glen School where she taught grade four in the same room for 31 years, touching many young lives and developing lifelong friendships. It was also at Ross Glen School where Denise met and worked alongside Gary McDougall who later became the love of her life. Denise and Gary were married on July 25th, 1987, and together they had three beautiful children: Brennan, Ashley and Brittney. A few years later they decided to leave the city to build their dream home and raise their children on an acreage. It was during this time that Denise discovered her love of gardening, nature, and the outdoors. Denise was never afraid of getting her hands dirty and working alongside Gary no matter what the task. Camping was an activity enjoyed yearly and was always made a priority, strengthening the bond between their family, relatives and friends. Denise also loved board games, collecting and watching movies, caring for all forms of wildlife, and had recently re-discovered her love of arts and crafts. As a daughter, mother, wife, sister and aunt, Denise always put her family first. This is what contributed to the unbreakable bond that her family shares now and forever more. The Funeral Mass will be celebrated at HOLY FAMILY PARISH, 1451 Strachan Road SE, on Friday, April 28th, 2017 at 3:30 p.m. with Father Philip Le, celebrant. Memorial gifts in Denise’s memory may be made to the SPCA, 55 Southwest Drive SW, Medicine Hat, Alberta, T1A 8E8. Condolences may be sent through www.saamis.com or to condolences@saamis.com subject heading Denise McDougall. Funeral arrangements are entrusted to

One Condolence for “DENISE McDOUGALL”