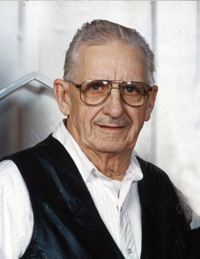 Delvin “Dell” Wallace Johnson passed away peacefully on Monday, April 24th, 2017 at the age of 82 years. Dell leaves to cherish his memory his beloved wife, Marilyn Johnson; five step-children, Dana Davis (Mark), Jori (Clayton) Martens, Pam (late, Myron) Kulyk, Bonnie (Kelly) Ross and Burt (Seline) Anderson; as well as fourteen grandchildren; and eleven great grandchildren. Dell was predeceased by Violet Johnson. His retirement in 2008 came after a lengthy career as a consultant with Pan Canadian/Encana Pipe Line. Dell was well respected among his peers and was a hard working, strong man with a kind and loving soul. As per Dell’s wishes there will be a private family gathering on Saturday, April 29th, 2017 to celebrate his life with an interment at Redcliff Cemetery at a later date. In lieu of flowers, memorial gifts in Dell’s memory may be made to the Alzheimer Society, 201, 770 – 6th Street SW, Medicine Hat, AB T1A 4J6 or to a charity of one’s choice. Condolences may be sent through www.saamis.com or to condolences@saamis.com subject heading Dell Johnson. Funeral arrangements are entrusted to
SAAMIS MEMORIAL FUNERAL CHAPEL CREMATORIUM & RECEPTION CENTRE, “The Chapel in the Park” #1 Dunmore Road SE, Medicine Hat, AB T1A 1Z5 (403)528-2599 www.saamis.com inquiry@saamis.com Locally owned and directed CGR Holdings Ltd.