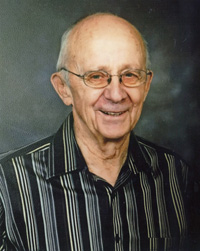 It’s with heavy hearts, the family of Andrew David Kerner “Andy”, announce his passing on Monday, April 24th, 2017 at the age of 82 years. Andy is survived by his wife of 55 years, Emma; his sons, Kevin (Shelly) Kerner, Kim (Shauna) Kerner, and Lynette (Brian) Boschee; six grandchildren, Samantha Boschee (Jon), Houston Boschee (Shelby), Kelsea Kerner (Justin), Wyatt Kerner, Whitney Kerner, and Colton Kerner; two great-grandchildren, Dylynn and Easton Smith; three brothers, Lawrence (Lucette) Kerner, Tony (Gail) Kerner, and Henry (Alda) Kerner; one sister, Cathy (Al) Davis; in-laws, Delores McMullan, Valerie Vurcurvich, Diana Garrecht, Pam (Micheal) David, Randy (Brenda) Garrecht, and Rob (Darlene) Garrecht; as well as numerous nieces and nephews. Andy was predeceased by his parents, Anton and Magdelena Kerner; his brothers, Francis, John, Joe, and Bill; his sisters, Anna, Julia, Emily and Zelma; as well as numerous brothers-in-law and sisters-in-law. Andy met his soulmate, Emma, in 1960 and they were married on August 7th, 1961 in Bow Island. Andy worked in seismic for 23 years out of Calgary. In 1975, he moved his family to Medicine Hat and went into partnership with his brother, Henry, in the trucking industry expanding to what it is today. Andy took great joy in spending time with family following each and every one with all their activities. He also enjoyed going out to Rieger’s Terminal every day and was still seen on the trucks from time to time. Fishing and hunting were some of his favourite activities and the last few years he enjoyed going for coffee with his coffee buddies. Andy was very active with all of these activities until the time of his passing. Vigil Rites (Prayers) will be said at SAAMIS MEMORIAL FUNERAL CHAPEL, #1 Dunmore Road SE, on Thursday, May 4th, 2017 at 7:00 p.m. The Funeral Mass will be celebrated at ST. PATRICK’S ROMAN CATHOLIC CHURCH, 238 – 2nd Avenue NE, on Friday, May 5th, 2017 at 1:30 p.m. with Father Philip Le, Celebrant. Interment will take place at Saamis Prairie View Cemetery. Memorial gifts in Andy’s memory may be made to the Alberta Heart & Stroke Foundation, #124, 430 – 6th Avenue SE, Medicine Hat, Alberta, T1A 2S8, or to Foothills Medical Centre, Intensive Care Unit, 1403 – 29th Street NW, Calgary, Alberta, T2N 2T9. Condolences may be sent through www.saamis.com or to condolences@saamis.com subject heading Andy Kerner. Funeral arrangements are entrusted to