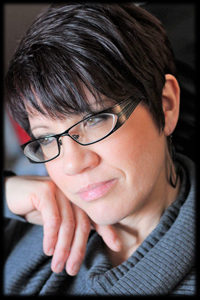 Surrounded by her family and close friends, Katharine Louise Dawson of Seven Persons, Alberta; beloved wife of Rick Dawson, went home to be with the Lord, on Thursday, April 27, 2017, at the age of 52 years after a brave battle with cancer. Kathy was born on March 4, 1965, in Brooks, Alberta to Peter and Margaret Hansen; the first of four daughters. She attended Duchess School throughout her childhood and teen years. In 1983, at the age of 18, she married Ron Barg. They farmed in the rural Brooks area and started their family in 1985, where they had their three children. In the spring of 1994, the family moved to Seven Persons. On October 14, 2006, Kathy married, Rick Dawson. She was an active member of her church and community. Kathy will be remembered as a loving and accepting mother and grandma. She was known for her ability to take something ordinary and make it beautiful. Kathy had a generous and compassionate heart and will be greatly missed by her family and friends. She is survived by her husband, Rick Dawson; children, Pamela Barg, Victoria (Brett) Seidler, and Joshua (Nichole) Barg; step-daughter, Candice (Dylan) Jury; grandchildren, Hailey, Jaycee, Connor, and Tahner Seidler, Jesse, Gage, Lucas, Sophia and Adreiona Barg; parents, Peter and Margaret Hansen; sisters, Beverley (Steve) Neigum, Wanda (John) Evans and Arlene (Blaine) Zandbelt; grandmother, Elizabeth Hansen, as well as many nieces and nephews. If friends so desire, memorial donations in Kathy’s name can be made to the Seven Persons Community Church, P.O. Box 129, Seven Persons, AB., T0K 1Z0. A celebration of Kathy’s life will be held in the Seven Persons Community Hall, Seven Persons, on Thursday, May 4, 2017 at 2:00 p.m., with Pastor Maury McNeil officiating. A time of fellowship will follow the service in the Community Hall. (Condolences may be expressed by visiting our website at www.cooksouthland.com) Honoured to serve the family is