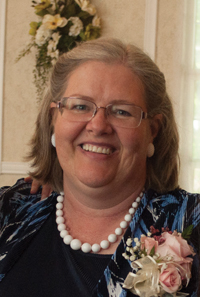 Sharon Werner, age 57 years, passed away after a short but hard-fought battle with cancer on Friday, April 28th, 2017 in Medicine Hat, Alberta. She was born in 1959 in Idaho Falls, Idaho to her mother, Anne and her late father, Barlow Christensen. She grew up in Park Forest, Illinois with her older sister, Susan and younger brother, Kirk, sister, Marcy, brother, Joe and late brother, Tom. She later attended university at Brigham Young University in Provo, Utah where she graduated with a BS in Chemical Engineering in 1985. During her college years, Sharon took 18 months off to serve a full-time mission in Paris, France for The Church of Jesus Christ of Latter Day Saints. In 1985, she married Jim Werner and moved to Parsons, Kansas, then in 1987 they moved to Corner Brook, Newfoundland and finally settled in 1993 in Medicine Hat where Jim continues to live. Sharon is succeeded by her six children and their families, Anne Werner, Kara Werner, Chris (Lexi) Werner, Tom (Chelsea) Werner, Kelly (Matt) Towsey and Jordyn Werner; two grandchildren, Ellie and TJ; her mother, Anne Christensen; two brothers, Kirk (Cathy) Christensen and Joe (Rachel) Christensen; two sisters, Susan (Layne) Jolley and Marcy (Scott) Hansen; as well as numerous nieces and nephews. Sharon was predeceased by her father, Barlow Christensen; and one brother, Tom Christensen. Those wishing to pay their respects may do so at THE CHURCH OF JESUS CHRIST OF LATTER DAY SAINTS, 1865 Division Avenue NE, Relief Society Room, on Saturday from 10:00 until 10:45 a.m. The Funeral Service will be held at THE CHURCH OF JESUS CHRIST OF LATTER DAY SAINTS, on Saturday, May 6th, 2017 at 11:00 a.m. with Bishop Mike McClung officiating. Interment will follow at Redcliff Cemetery. Memorial gifts in Sharon’s memory may be made to the Tom Baker Cancer Centre, 1331 – 29th Street NW, Calgary, Alberta, T2N 4N2. Condolences may be sent through www.saamis.com or to condolences@saamis.com subject heading Sharon Werner. Funeral arrangements are entrusted to