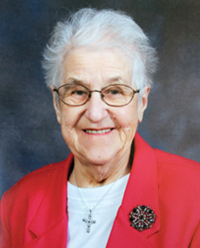 My mother was born in Prelate, Saskatchewan on December 12, 1930, the oldest of 4 children. She grew up on a farm north of Fox Valley, Saskatchewan during the Great Depression and through WW2. When she started school, she spoke only German – the school registered her as Emily, a name she had for the rest of her life. She taught her parents to speak English.

At 18 years of age, she hitched a ride with a family friend to Medicine Hat, Alberta and got a job at MedAlta Potteries, which only lasted a short while because she found it too dusty. She met Leonard Huddlestone at a dance at the Moose Hall and were married in 1952. Leonard found work in Lethbridge, so they moved there and I was born at the Galt Hospital. They relocated to Calgary where my sister was born in 1955.

On New Year’s Eve, December 31, 1955, Leonard unexpectedly abandoned Mom. In Spring of 1956, Mom and her 2 children accepted the offer to live with Leonard’s mother, my “Grannie,” on 5th Street on the Flats, in Medicine Hat.

Mom found work in the kitchen of the Medicine Hat Hospital and later as a Ward Clerk on the 5th floor until she retired in 1983.

Mom outlived 2 husbands, but she didn’t outlive her kids. Darlene and I are the result of a woman determined to make the best of circumstances, who valued and enjoyed family time and who engaged in many passions. She loved to garden. She was a regular church-goer and in later years, sang in the choir and greeted parishioners at the entrance. She loved camping, fishing, and especially her time in the Rocky Mountains. She loved to bake and definitely knew the value of a dollar!

We will remember our Mom as a practical person who was never without an opinion.

Those wishing to pay their respects may do so at SAAMIS MEMORIAL FUNERAL CHAPEL, 1 Dunmore Road SE, on Friday from 7:00 until 9:00 p.m. Vigil Rites (Prayers) will be held at SAAMIS MEMORIAL FUNERAL CHAPEL, on Friday, May 26th, 2017 at 7:00 p.m. The Funeral Mass will be celebrated at HOLY FAMILY PARISH, 1451 Strachan Road SE, on Saturday, May 27th, 2017 at 11:00 a.m. with Father Philip Le, Celebrant. Memorial gifts in Emily’s memory may be made to the Canadian Cancer Society, 325 Manning Road NE, Calgary, AB, T2E 2P5, or to the Canadian Diabetes Association, Medicine Hat & District Branch, 102, 73 – 7th Street SE, Medicine Hat, AB, T1A 1J2. Condolences may be sent through www.saamis.com or to condolences@saamis.com subject heading Emily Anhelher. Funeral arrangements are entrusted to