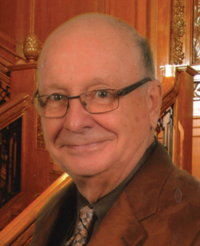 Robert Stewart Tudor, beloved husband of Linda Tudor of Medicine Hat, passed away on Monday, May 29th, 2017 at the age of 70 years. Robert also leaves to cherish his memory his mother, Joyce Tudor; six brothers, Michael (Cindy), Colin (Bonnie), Gordon (Linda), Stephen (Margaret), Trevor and Allan; one sister, Jackie Little; as well as numerous nieces and nephews. Robert was predeceased by his father, Trevor Tudor. Robert was born on January 28th, 1947 in London, England and married Linda on May 31st, 1969 in Kingston, Ontario. He worked in the oil field for several years. Robert volunteered at Westlawn Junior High School in Edmonton for 4 years, was a Big Brother and mostly recently volunteered at the Medicine Hat Women’s Shelter for several years. Robert also worked at Chinook Village. Those wishing to pay their respects may do so at SAAMIS MEMORIAL FUNERAL CHAPEL, 1 Dunmore Road SE, on Wednesday from 7:00 until to 9:00 p.m. and on Thursday from 9:00 until 9:55 a.m. The Funeral Service will be held at SAAMIS MEMORIAL FUNERAL CHAPEL, on Thursday, June 1st, 2017 at 10:00 a.m. with Gary W. Goran officiating. A private interment will take place at Hillside Cemetery at a later date. Memorial gifts in Robert’s memory may be made to the Medicine Hat Women’s Shelter, (Phoenix Safe House), P.O. Box 2500, Medicine Hat, Alberta, T1A 8G8. Condolences may be sent through www.saamis.com or to condolences@saamis.com subject heading Robert Tudor. Funeral arrangements are entrusted to