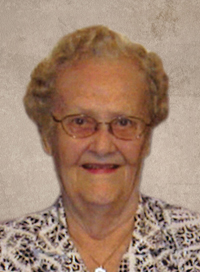 Beryl Monica “Tod” Styles (nee Atkinson) of Medicine Hat, passed away on Thursday, May 25th, 2017, at the age of 95 years. She was born in Rolla, B.C., the second daughter of a pioneering merchant family. Following her Grade 12 completion, she taught 2 years at Pouce Coupe, British Columbia, before travelling to Victoria, British Columbia, for her teacher’s certification. Tod then taught at Prince George, Montney and Dawson Creek, B.C. After marrying her husband, Ken Styles, in 1953, they moved to Medicine Hat and she continued her teaching career until 1985. She was proud of the fact that she only taught grade one, firm in the knowledge that that was the most important grade to lay the foundation for life-long learning. She was an exceptional teacher, and mentally never left the classroom, always thinking of ways to improve her classes. Although Tod never had children, she always thought of her students as family and followed many through their graduation, and enjoyed the opportunity to teach children of former students. Tod received an Honored Educator Award and was a member of the Order of the Eastern Star. Tod was predeceased by her husband, Kenneth; her parents, Howard and Shirley Atkinson; and her infant sister, Daphne. Tod leaves to cherish her memory her sister, Shirley Nelson, (who just passed away on May 28th, 2017); two nephews, Dr. Beaumont Nelson and Toby Atkinson; a niece, Monica Nelson; grandnieces and grandnephews, Howard Nelson, Dreyer Nelson, Hillary Nelson and Victoria Nelson; great grandniece, Piper; and great grandnephew, Liam. A closed casket visitation will be held at SAAMIS MEMORIAL FUNERAL CHAPEL, 1 Dunmore Road SE, on Monday from 12:00 to 1:15 p.m. The Funeral Service will be held at SAAMIS MEMORIAL FUNERAL CHAPEL, on Monday, June 5th, 2017 at 1:30 p.m. with Reverend Guy Snell officiating. A luncheon will follow at the Saamis Creekside Centre. Interment will take place in the family plot at Hillside Cemetery. In lieu of flowers, memorial gifts in Tod’s memory may be made to the Canadian Cancer Society, 325 Manning Road NE, Calgary, Alberta, T2E 2P5, or to the Medicine Hat & District Health Foundation, 666 – 5th Street SW, Medicine Hat, Alberta, T1A 4H6. Condolences may be sent through www.saamis.com or to condolences@saamis.com subject heading Tod Styles. Funeral arrangements are entrusted to