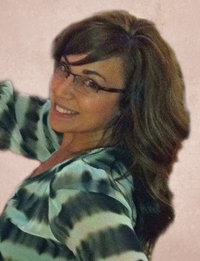 It is with broken hearts that the family of Nicole Flaig (nee Elhart) announce her passing on Monday, June 5th, 2017 at St. Joseph’s Carmel Hospice, surrounded by her loved ones, in Medicine Hat at the age of 41 years. Nicole is survived by her beloved children, Ethan, Ty and Emersyn Flaig; and her husband, Sheldon Flaig. She also leaves to cherish her memory her parents, Larry & Judy Elhart; her brother, Mark (Amy) Elhart along with their sons, Kane and Vann. She is also survived by her in-laws, Terry & Linda Flaig; brother-in-law, Jason (Char) Flaig; and sister-in-law, Brandy (Steven) Anderson and their respective families. She also leaves behind her aunt, Verla (Joe) Liptak; cousins, Val (Chris) Orban, Cathy Trempner, David (Lisa) Liptak and Sherri (Eric) Nielsen and their families. She was predeceased by her grandparents, Albert & Irene Elhart and Jake & Joan Langeman; as well as her uncle and aunt, Norman & Margaret Elhart. Nicole was born in Medicine Hat on July 25th, 1975 and received her basic education in Medicine Hat as well as 2 years at Medicine Hat College. Nicole had various jobs throughout her life until the birth of her first child, when she chose to stay at home to be a full-time mother to her 3 children (and what a devoted mother she was). Nicole was known for her bright smile and sunny disposition as well as her ability to make friends wherever she went. Nicole will be dearly missed by her family and many friends. A private interment took place at Hillside Cemetery on Friday, June 9th, 2017 with Pastor Dave Maneschyn officiating. A public Come and Go Celebration of Nicole’s Life will be held at THE BEVERIDGE, 620 – 2nd Street SE, on Saturday, June 17th, 2017 from 1:00 until 6:00 p.m. Memorial gifts in Nicole’s memory may be made to the St. Joseph’s Home (Carmel Hospice), 156 – 3rd Street NE, Medicine Hat, Alberta, T1A 5M1. Condolences may be sent through www.saamis.com or to condolences@saamis.com subject heading Nicole Flaig. Funeral arrangements are entrusted to