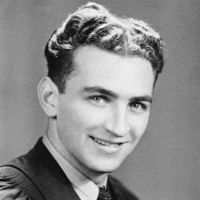 Dave was a multi-talented individual, distinguishing himself both as a musician and as a scientist. His first instrument was violin, and he then took up the trumpet so that he could perform in dance bands during the 1940’s. After graduating from the University of Alberta with a major in Agriculture, he joined the Royal Canadian Air Force during World War II, first as a bandsman in what became the North West Air Command Band, then transferred to bacteriological research in the later stages of the war. He mustered out of the RCAF with the rank of Warrant Officer I. He continued his research career with Canada’s Defence Research Board at laboratories at Suffield, Alberta and Kingston, Ontario.

At Dave’s request a private service will be held.