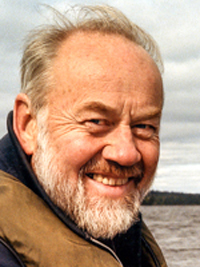 Born on June 18, 1930 in Saskatchewan to William Elliott Brown and Linda Lindskog Brown, Bill graduated Technical Collegiate in Saskatoon in 1948 and enrolled in general arts and then law at the University of Saskatchewan. Bill Brown married the love of his life, Polly Korda, on December 31, 1951. Bill spent a 56 year legal career in Alberta and Saskatchewan, including Brooks, Medicine Hat, Calgary, North Battleford, and La Ronge. Much of his career involved general private practice, but included legal aid services in northern Saskatchewan. Bill took great pleasure in helping clients to navigate some of the most difficult and stressful moments of their lives.

On the prairies, Bill became an avid golfer, bird hunter, and bridge player. In Medicine Hat Bill much enjoyed his association with the Cypress Club. An exceptional photographer, Bill developed many candid and affecting black and white prints of Polly and their children and relatives. In La Ronge Bill and Polly became keen anglers, frequently taking family, friends, and visitors out to catch big northern pike. As a boy in Saskatchewan during the dirty thirties, Bill whittled whistles out of willow twigs in the spring. Later, Bill became “The Whistle Man” to children in La Ronge, spending spring days in local parks carving whistles and eventually giving away over 5000 to children and adults. In 2013 Bill shut his law practice in La Ronge and moved to Nelson to live close to family.

We extend much thanks to Dr. Michael Vance, Dr. Anne-Marie Baribeau, Nelson Home Care Services, and 3rd Floor Staff at Kootenay Lake Hospital for their wonderful care. A memorial celebration will take place at Kalein Hospice Centre, 402 West Richards Street, Nelson, BC at 3:00 pm on Friday, June 16, 2017. In lieu of flowers, donations in Bill’s memory may be made to the Nelson Civic Theatre Society, 719 Vernon Street, Nelson, BC V1L 4G3.