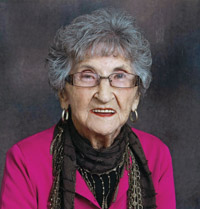 Monica Mastel of Medicine Hat, beloved wife of the late Adolph Mastel, passed away on Monday, June 12th, 2017 at the age of 90 years. Monica leaves to cherish her memory one daughter, Donna (Nick Rothwell) Mastel of Nanaimo, BC; two sons, Wayne and Bruce of Medicine Hat; three grandchildren, Kara (Dave) Clarke of Kimberley, BC, Scott (Janine) Mastel of Medicine Hat and Jessica Mastel of Medicine Hat; four great grandchildren, Logan and Holly Mastel, and Nathan and Marla Clarke; one sister, Betty Hopfauf of Medicine Hat; one brother, Dale (Clara) Anhelher also of Medicine Hat; as well as Adolph’s family; and numerous nieces and nephews. Monica was predeceased by her parents, Valentine and Katherine Anhelher; brothers, Vincent, Frank, Fred, Tony, John and Jack; sisters, Margaret Wickenheiser, Rachel Antoni, Anne Vollman and Anna Bitz. Monica was born on December 16th, 1926 in Lancer, Saskatchewan, where she was raised on the family farm. She married Adolph Mastel of Liebenthal, Saskatchewan on May 27th, 1952 and they resided on a farm in Liebenthal until moving to Medicine Hat in 1960. In Medicine Hat Monica began working at the Medicine Hat Curling Rink then moved to the Medicine Hat Laundry & Linen Supply and finished working at the Medicine Hat Hospital. Monica was a member of the Catholic Women’s League. Throughout her lifetime she had a love of singing and was part of the church choir up until a few years ago. She was also a member of the Adele Armstrong singers. In her retirement she was an avid seamstress, enjoyed gardening and camping as well as taking ceramics classes. She loved playing cards, especially canasta with her sister, Betty and her nieces, Rachel and Monica. Monica will be forever loved and sadly missed by all her family, friends, especially her grandchildren and great grandchildren. Those wishing to pay their respects may do so at SAAMIS MEMORIAL FUNERAL CHAPEL, 1 Dunmore Road SE, on Wednesday at 1:00 p.m. until 4:00 p.m. and 6:00 p.m. until 9:00 p.m. and at ST. PATRICK’S ROMAN CATHOLIC CHURCH, 238 – 2nd Avenue NE, on Thursday from 10:00 a.m. until 10:55 a.m. Vigil Rites (Prayers) will be held at SAAMIS MEMORIAL FUNERAL CHAPEL on Wednesday, June 14th, 2017 at 7:00 p.m. The Funeral Mass will be celebrated at ST. PATRICK’S ROMAN CATHOLIC CHURCH, on Thursday, June 15th, 2017 at 11:00 a.m. with Father Philip Le, Celebrant. Interment will follow in the Roman Catholic Section at Hillside Cemetery. Memorial gifts in Monica’s memory may be made to the Alzheimer Society, 201, 770 – 6th Street SW, Medicine Hat, Alberta, T1A 4J6. Condolences may be sent through www.saamis.com or to condolences@saamis.com subject heading Monica Mastel. Funeral arrangements entrusted to