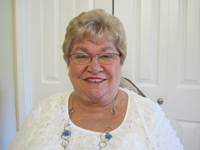 Eleanor was born in Medicine Hat on June 12th, 1932 to Fredrick and Clara Lutz and lived her early years in Irvine, Alberta where she attended school until Grade 6. At the age of 12, she started working at the Irvine restaurant helping her mother and father. This was to be the start of what would be a 53-year career in restaurant industry. Eleanor had the house to herself until along came her brother, Dennis Lutz in 1949.

While playing Ladies Fastball for the Medicine Hat Orioles, she met John Dorn (who helped coach) and they dated until December 1st, 1950 when they were married in Irvine.

Eleanor and John travelled with a road building crew for the next few years settling in Three Hills so eldest son, Glenn, could start school. Eleanor and John would remain in Three Hills where they raised their five children. Eleanor worked diligently in the Three Hills area and was known for her great humour and tireless work ethic. She moved to Medicine Hat in 1986 to attend to her mother with the help of brother, Dennis Lutz. Eleanor will be greatly missed.