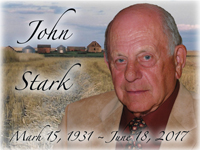 John Stark passed away peacefully at home while in the loving care of his family on Sunday, June 18, 2017, at the age of 86. ‘Johnny’ is survived by Irene, his wife of 57 years; their children, Rhonda Gergely, Barbara Anne (Mario) Koch, Garth (Colette) Stark and Jim Gergely as well as nine grandchildren (and their spouses) and eight great-grandchildren; one brother, Larry; step-brother, Father Martin Moser as well as numerous brothers-in-law, sisters-in-law, nieces and nephews. He was predeceased by his parents, George and Gertrude Stark (John Moser); brothers, Nick (and wife Vivian) and Eddie as well as his father and mother-in-law, Philip and Barbara Fauth. Johnny was born and raised in the small town of Mendham, SK. His life there revolved around the family business of Starks Hardware, Mendham Groceries and the Post Office where getting the mail became a daily social event for the locals. Johnny took over the family farm 4 miles south of Mendham and continued to farm until moving to Medicine Hat in 1999. He was involved with many community and church committees including the Grand Knights of Columbus, St Anthony’s parish council, Mendham Rec. Board, Leader Hospital board, chairperson of the Mendham Credit Union, and at the time of his retirement, he was still serving as the Mayor of Mendham. After retirement, Johnny and Irene enjoyed traveling with family and friends, spending winter months in the south. Their home in Park Meadows became the gathering place for everyone. Johnny loved sports but lived for golf and he was the ultimate baseball fan right up to the time of his passing. He was known for his big hands, gentle nature and sense of humor. We will miss you Johnny-bear!! Vigil Prayers will be recited at Cook Southland Funeral Chapel, 901 – 13 Street S.W., Medicine Hat on Wednesday, June 21, 2017, at 7:00 p.m. Funeral Mass will be concelebrated at Holy Family Parish, 1451 Strachan Road S.E., Medicine Hat on Thursday, June 22, 2017, at 11:00 a.m. with Father Philip Le and Father Martin Moser celebrant. A time of fellowship will follow in the Parish Hall with Private Interment thereafter at Hillside Cemetery. (Condolences may be expressed by visiting our website at www.cooksouthland.com) If friends so desire, memorial tributes in John’s name may be made to Home Care or Palliative Care. Please ensure donations are made payable to the Medicine Hat &â€ˆDistrict Health Foundation, 666 – 5 Street S.W., Medicine Hat, Alberta, T1A 4H6. Honoured to serve the family is