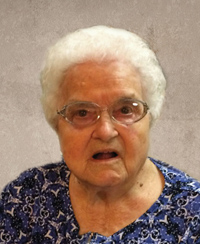 Mrs. Olinda Yanke (nee Lutz) of Medicine Hat, beloved wife of the late Carl Yanke, passed away on Saturday, June 24th, 2017 at the age of 93 years. Olinda was predeceased by her son, Cecil; and her daughter, Loretta; as well as several brothers and sisters. Olinda leaves to cherish her memory two grandchildren, Rob Yanke (Lorelei) and Lorene (Kevin) Stenhouse, both of Medicine Hat; five great grandchildren, Derek, Dallas and Dylan Yanke and Jaelyn and Peyton Stenhouse, that were her pride and joy. Olinda is also survived by one brother, Ralph (Irene) Lutz. Olinda was born on October 14th, 1923 in the Manyberries area. After her education and working on the farm she met Carl at a dance in the Wisdom area and they married on October 25th, 1941, spending the next 60 years together. Olinda worked right along Carl helping to build a new house in Medicine Hat after moving from the farm to the city. Along with her excellent gardening and cooking skills, she was also handy with crocheting and made many doilies for family and friends alike. A true Calgary Flames fan, she also like to spoil her family with German food that nobody could resist. She had an instrumental hand in raising her grandchildren and loved her great- grandchildren equally as much. We are going to miss this witty and hard-working grandma that meant so much to all of us. A Graveside Service will be held at HILLSIDE CEMETERY, Gershaw Drive SW & 10 Avenue SW, on Thursday, June 29th, 2017 at 1:00 p.m. with Life Celebrant Lynett Getz officiating. Those wishing to attend, please meet inside the cemetery gates at 12:45 p.m. Memorial gifts in Olinda’s memory may be made to The Valleyview, 65 Valleyview Drive SW, Medicine Hat, Alberta, T1A 7K5 or to SEASAR (South Eastern Alberta Search and Rescue), 8 – 49 Viscount Avenue SW, Medicine Hat, Alberta, T1A 5G4. Condolences may be sent through www.saamis.com or to condolences@saamis.com subject heading Olinda Yanke. Funeral arrangements are entrusted to