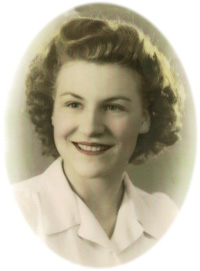 Hazel Beatrice Simmons, beloved wife of Frank Simmons of Medicine Hat, passed away on Sunday, June 25th, 2017 at the age of 90 years. Hazel also leaves to cherish her memory her children, Diana Simmons (Alfred Egan Home), Darlene (Arnie) Macauley, Debbie (Randy) Zaiser and Rodney (Wanda) Simmons; six grandchildren, Jenna (Jamie) Simmons, Sydney Simmons, Jan (Angela) Macauley, Dawn (Crystal) Macauley, Cody Zaiser and Brady (Kate) Zaiser; six great grandchildren, Jessika Macauley, Edwin Macauley, Autumn Macauley, Serena Macauley, Quinn Macauley and Willow Macauley; one brother, Roger (Violet) Beach; as well as numerous nieces and nephews. Hazel was predeceased by her parents, August and Mary Beach; and three brothers, Earl Beach, Alvin Beach and Bill Beach. Mom was born in Medicine Hat and raised in Wisdom where she attended Lloyds School from grade one to nine. Mom had four brothers and told many stories of their adventures such as collecting garter snakes and riding bareback to school. She also loved caring for her baby brother, Roger while her mother was busy doing chores. She finished high school at Alexandra and at 18 became the manager of the food counter at Woolworths. Mom loved to go to dances, but mom and dad met while skating, where she caught his eye and they married September 1st, 1947. Diane was born on May 21st, 1949 and because of her handicap mom became an avid supporter for the mentally handicapped. Mom was a charter member of the Medicine Hat and District Association for the Mentally Handicapped and a director at the provincial level. She was also a member of the school board when George P. Vanier School was built. After Darlene, Debbie and Rod were born mom worked part-time in the Woolworths toy department during the Christmas season and later as a stenographer for the school board. Mom then attended the Medicine Hat College and the University of Lethbridge obtaining her Bachelor of Education while Rod was only nine years old. She then taught at River Heights School where she loved teaching grade seven and coaching the girls softball team. She especially enjoyed the kids from the country. Later, she taught at Connaught and Herald Schools but her career was interrupted after only seven years due to a heart condition. Mom had many hobbies including knitting (which she won many awards for), sewing, gardening, travelling and fishing from canoes dad built with her help. We took many camping trips, the most memorable being summers in Elkwater in our large green tent. Mom always said being surrounded by nature was her church. Mom’s pride and joy were her six grandchildren and great grandchildren. She always loved to have family around and cook large family feasts. Everyone especially loved her fried chicken and meatballs with mushroom gravy on homemade noodles. A Private Graveside Service will take place in July at Saamis Prairie View Cemetery. In lieu of flowers, memorial gifts in Hazel’s memory may be made to the Alfred Egan Home, 939 – 1st Street East, Bow Island, Alberta, T0K 0G0 or to the SPCA, 55 Southwest Drive SW, Medicine Hat, Alberta, T1A 8E8. Condolences may be sent through www.saamis.com or to condolences@saamis.com subject heading Hazel Simmons. Funeral arrangements are entrusted to