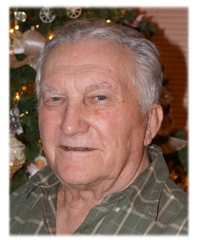 1929 ~ 2017 Henry Stanley Drozdz, beloved husband to Mary Drozdz of Seven Persons, passed away at the Medicine Hat Regional Hospital on Thursday, June 29, 2017, at the age of 87 years. He leaves to cherish his memory four children, Ken (Crystal Crawford) Drozdz, Kathy (Tracy) DeValter, Brenda Ann Drozdz and Tim (Brenda) Drozdz; five grandchildren, Brayden DeValter, Devin, Abby, Toby Drozdz, Keith (Heidi) Crawford and his family, as well as four sisters, Wanda Feeney, Irene Schwab, Frances Schwabe and Patricia Lynch and their families. Also left behind are numerous members of Mary’s family. He was predeceased by his parents, Julia and Bill Grabowicz and Stanley Drozdz, an infant brother, Edward and his father and mother-in-law, John and Annie Stopanski. Henry was born December 14, 1929 at Jenner, Alberta. He attended Osborne School in the Tide Lake area, and this is where he also farmed. He met the love of his life, Mary and they were married April 4, 1959, celebrating 58 years of marriage. In 1961, Henry and Mary moved to Medicine Hat to work in the excavating business for Frank DeMare Construction. Soon after he ventured into his own business with his first backhoe. As Henry’s entrepreneurial skills grew, he made the move with his family to Seven Persons in 1971. With his good friend and business partner, Glen Stiff, they developed the Four Winds Trailer Court, which expanded the hamlet of Seven Persons. With Henry’s sons, the excavating business grew to include trenching and plowing in gas lines. However, his proudest achievements came from developing fresh water springs for farmers and ranchers all across southern Alberta and southwest Saskatchewan. To compliment his working life, Henry and his family enjoyed many road trips and camping excursions and social visits with friends and relatives. He was a kind, considerate, honest man to all who knew him. His greatest joy was get-togethers with family, his children and grandchildren. He will be sadly missed by all. The Funeral Mass will be celebrated at St. Patrick’s Roman Catholic Church, 238 – 2 Avenue N.E., Medicine Hat on Wednesday, July 5, 2017, at 11:00 a.m., with Reverend Father Tomy Manjaly celebrant. Interment will follow at Hillside Cemetery. (Condolences may be expressed by visiting our website at www.cooksouthland.com) If friends so desire, memorial donations in Henry’s name may be made directly to the Canadian Cancer Society, 200 – 325 Manning Road N.E., Calgary, Alberta, T2E 2P5 or to the charity of one’s choice. Honoured to serve the family is Cook Southland Funeral Chapel, 901 – 13th Street S.W. Medicine Hat, Alberta T1A 4V4 Phone 403-527-6455

One Condolence for “Henry Drozdz”