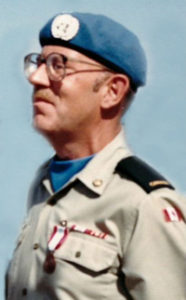 He was a retired Canadian Armed Forces Warrant Officer stationed in Ontario, Manitoba, Lahr Germany, Petawawa, New Brunswick, and Alberta. He also did 4 tours of duty as a peacekeeper in the Middle East. James enjoyed his military career and his times with his wife of 52 years.

He is survived by his wife, Roberta (Doiron); a daughter, Tara Gordon; a grandson, Jesse, whom Jim and Roberta brought up as their own; a granddaughter, Sophia; half-brothers and half-sisters: Lynn, Scott, Debbie and Gail and a loving aunt, Pat.

He was predeceased by his father, Don Gordon; mother, Viola Sommers; one half-brother, Neil.

According to his wishes, there will be no funeral service and no visitation. A later service will be held in Ontario.

In memory of James, a contribution to the oncology unit of the Dr. Georges-L Dumont UHC would be appreciated.

Cremation and funeral arrangements are under the direction of Frenette Funeral and Cremation Centre, 396, Main Street, Shediac, New Brunswick (506-532-3297).

Words of comfort and online condolences may be forwarded through our website at: www.frenettefuneralhome.com