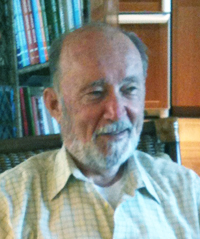 Born and raised in Medicine Hat by Erna (Draudson) and J.R.(Jack) Beaton. In 1948, Hugh enlisted in the RCAF and became a flying instructor with the rank of Flight Lieutenant. He married Yvonne Clary on September 1, 1956. In 1966 Hugh earned a BSc in Business Administration from the University of San Francisco (Dean’s List and Beta Gamma Sigma) and accepted membership in MENSA in 1970. He began a career in systems analysis in California and moved to Hawaii where he also acted as wage and salary negotiator for Castle and Cook. For five years he headed the Mensa society in Honolulu. Forever seeking new challenges, Hugh used his Realtor’s license to successfully launch Harbor Realty. After retiring to Seattle, Hugh took a round-the-world cruise on a container ship. That led to a second trip to the smallest nation in the British Commonwealth, Tuvalu. While continuing to travel, Hugh lived in Calgary, Napa, Phoenix, back to Honolulu and Victoria before returning to his beloved Medicine Hat. He established the Hugh Campbell Beaton scholarship in Business Administration at Medicine Hat College. Hugh is the published author of “Animal Stories”, his A to Z take on the secret lives of creatures. Predeceased by his parents and siblings: John Edward “Jack”, Robert Malcolm “Bob” and B. Norene Beaton, while left to celebrate his life is sister Barbara Ross and the loving families of Jack and Bob. Throughout his life, Hugh was a kind and loving man. A Private Family Graveside Service will be held at Hillside Cemetery on Tuesday, July 18th, 2017. Condolences may be sent through www.saamis.com or to condolences@saamis.com subject heading Hugh Beaton. Funeral arrangements are entrusted to