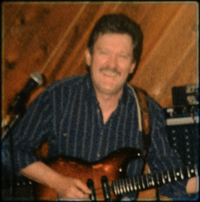 1944 ~ 2017 Mr. Donald Gordon Patterson, beloved husband of 37 years to Janet, passed away on Sunday, July 16, 2017, at the age of 72 years. He will be sorely missed and lovingly remembered by his children, Clay (Brandy), Taude (Megan); mother-in-law, Katherine Konrad; brother-in-law, Wayne (Margaret) Konrad as well as nieces, Lori (Morley) Herter and Kim (Mike) Vair and their families. He was predeceased by his parents; son, Troy in infancy and daughter, Danielle. Don was a colourful character with many talents, most of which were self taught. We liked to call him our very own renaissance man! Whenever anything sparked his interest he would pursue it with a passion whether it was photography, sketching, painting, fishing, sausage making or carpentry. He was a terrific cook – a foodie long before “foodie” was ever a common term – always perfecting a recipe or creating his own. Don taught himself to play guitar at a young age which led to his career as a professional musician. He played across Canada with various musicians and bands but most memorably “Springfield”. Don took great joy in entertaining and loved to share jokes and stories with friends and family over a good meal and a few cold beer. He could never remember an important date but never forgot a joke. If Don had a message to leave he would tell us to “enjoy the music and always, always dance to your own tune”. The family would like to thank the home care nursing team and especially Johanna for going above and beyond to make Don’s final weeks and days more comfortable. At Don’s request, there will be no formal funeral service. In lieu of flowers, memorial donations in Don’s name may be made to Persian Dreams and Canine Themes, 127 – 1 Street S.W., Medicine Hat, Alberta, T1A 3Z1 (Condolences may be expressed by visiting our website at www.cooksouthland.com) Honoured to serve the family is Cook Southland Funeral Chapel, 901 – 13th Street S.W. Medicine Hat, Alberta T1A 4V4 Phone 403-527-6455