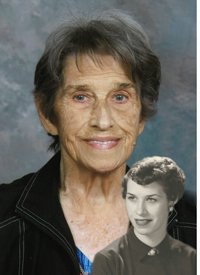 Margaret Loressa Hopkins, beloved wife of Jack Hopkins, passed away peacefully in Bow Island on Thursday, July 27, 2017 at the age of 84 years.

The Funeral Service will be held at St. Andrew’s United Church, 139 – 2 Avenue West, Bow Island on Monday, July 31, 2017 at 2:00 P.M. Condolences may be forwarded by visiting our website at www.southlandfuneral.com.

Besides her parents, Margaret was predeceased by her sisters Elaine Henry and Dixie Dyck, brother Doug Henry and brothers-in-law Ben Dyck and Nels Nergaard.

Margaret was born in Raymond to Ella (nee Court) and Vern Henry on February 2, 1933. She spent most of her youth living in British Columbia before moving back to Lethbridge and Taber. It was here that she met and married Jack Hopkins on October 15, 1955. They moved to the farm south of Grassy Lake and started their family. Shortly after, they moved to the farm north of Burdett.

Margaret loved sports, especially baseball, where she made many lifelong friends. As a child she enjoyed skiing, participating in track and field and swimming. She was active in the Burdett Community coaching baseball, youth group, United Church Women, Women’s Institute, serving at the Burdett Community Hall, as well as being involved with numerous other committees in Bow Island.