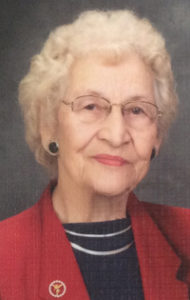 Our beloved mother Amy, passed away at age 90 in the Peter Lougheed Centre in Calgary from recent complications of a blockage.

Amy spent her adult life living in Calgary and working at legal firms before moving to Irvine, Alberta to own and operate the Irvine Hotel. She worked countless hours with seemingly boundless energy and still made time to bring kids to activities.

Upon Ernie’s death in 2001, Amy retired & moved to Medicine Hat and eventually moved into Teoda Lodge where she enjoyed many years. She moved to Calgary in November 2016 to be closer to Simone.

The family gratefully wishes to acknowledge the wonderful care she received at Teoda in Medicine Hat, at the Calgary Holy Cross Manor, and finally at the Peter Lougheed Centre.

The funeral service will be held Friday August 4, at 5:00pm at St. Peter’s Roman Catholic Church, 541 Silvergrove Drive NW, Calgary. The family invites friends and family to join them at Simone & Murray’s house following the service. Donations can be made to the Canadian Mental Health Association or the charity of your choice. Condolences may be sent to Heritage Funeral Home (hffs.ca).