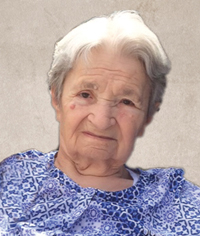 Afina Luca of Medicine Hat, beloved wife of the late Ion Luca, passed away on Wednesday, August 9th, 2017 at the age of 90 years. Afina leaves to cherish her memory three sons, Radu (Ana) Luca, Viorel (Milena) Luca and Emil (Lore) Luca; two daughters, Flora (John) Petrehele and Ana Luca; nine grandchildren, Sorin Luca, Adriana (Sergio) Cruces, Nadina (Ryan) Westland, Vio Jr. Luca, Jessica Luca, Gabriel Petrehele, Victor Petrehele, Halley Munsch and Thomas Melton; and seven great grandchildren. Afina was predeceased by her husband, Ion Luca; one daughter, Maria Melton; her parents, Nicolae and Maria; and five brothers. Afina was born in Poieni de Sus, Romania on April 11th, 1927. She immigrated to Canada in 1988 to join her children. Afina was a wonderful mother and was so happy to have her children together. Family always came first to Afina. She made many good friends at First Assembly Church and loved to serve the Lord all her life. Afina was well loved by the staff at Sunnyside and Haven Care Centre; she received outstanding support and care from them. Those wishing to pay their respects may do so at SAAMIS MEMORIAL FUNERAL CHAPEL, 1 Dunmore Road SE, on Friday, August 11th, 2017 from 7:00 until 9:00 p.m. and at FIRST ASSEMBLY OF GOD, 395 – 9th Street SE, on Saturday, August 12th, 2017 from 12:00 until 12:55 p.m. The Funeral Service will be held at FIRST ASSEMBLY OF GOD, on Saturday, August 12th, 2017 at 1:00 p.m. with Pastor Matthew Redstone officiating. Interment will take place at Saamis Prairie View Cemetery. In lieu of flowers, memorial gifts in Afina’s memory may be made to the South Country Village, Sunnyside Care Centre, 1720 Bell Street SW, Medicine Hat, Alberta, T1A 5G1. Condolences may be sent through www.saamis.com or to condolences@saamis.com subject heading Afina Luca. Funeral arrangements are entrusted to