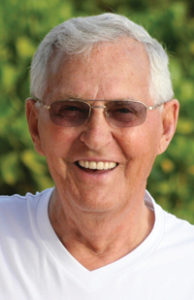 David Harris of Medicine Hat, Alberta died peacefully in his sleep on Saturday, August 12th, 2017 after a 17-year battle with cancer. He was born on April 25th, 1939 to John and Katrina Harris, in Endeavour, Saskatchewan, the youngest of 11 children. He leaves behind his two siblings, Olie Harris of Meadow Lake, SK and Lena Ticehurst of Port Coquitlam, BC. After growing up in rural Saskatchewan, he travelled to Winnipeg to work on the Red River Floodway, and met the love of his life, Anne Tasker Alexander. They were married on May 27th, 1966 and made their way to Alberta to begin their family. Their children, Dawn Katherine and John David, were born shortly after they settled in Calgary. After finishing his post-secondary schooling at SAIT, Dave began working as a heavy-duty mechanic for Ferguson Supply. In 1979, he moved his family to Medicine Hat, where he stayed until his final days. His career was completed as shop supervisor for the M.D. of Cypress. He loved Medicine Hat, and became involved with several charity men’s groups such as the Moose and ACT, always thinking of those in need. David was an avid sports fan, if he wasn’t curling or golfing, he was cheering on his favorite teams, especially his beloved Flames and Stampeders. Dave and Anne loved to travel in recent years, making new and special friends along the way. David leaves behind his wife, son, and daughter; as well as son-in-law, Frank; and grandchildren, Drew, Keath, Cailin, and Taytan. Our family has some comfort in knowing that he is now embracing his oldest grandchild, Jesse, in heaven. Rest in peace Dave, we will cherish your hearty laugh and all the fun times we shared with you. We love and miss you dearly. Services will be held at SAAMIS MEMORIAL FUNERAL CHAPEL, 1 Dunmore Road SE, on Thursday, April 17th, 2017 at 1:00 p.m. with Gary W. Goran officiating. A private interment will follow at Hillside Cemetery. In lieu of flowers, memorial gifts in Dave’s memory may be made to the Canadian Cancer Society, 325 Manning Road NE, Calgary, AB T2E 2P5 or to a charity of your choice. Condolences may be sent through www.saamis.com or to condolences@saamis.com subject heading Dave Harris. Funeral arrangements are entrusted to SAAMIS MEMORIAL FUNERAL CHAPEL CREMATORIUM & RECEPTION CENTRE, “The Chapel in the Park” #1 Dunmore Road SE, Medicine Hat, AB T1A 1Z5 (403)528-2599 www.saamis.com inquiry@saamis.com Locally owned and directed CGR Holdings Ltd.