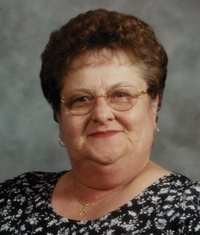 Elaine Audrey Doucette, beloved wife of Louis Doucette of Medicine Hat, passed away on Sunday, August 20th, 2017 at the age of 75 years. Elaine also leaves to cherish her memory her daughter, Bonnie Doucette (Tim Roebuck); her son, Mike Doucette (Linda Smith); two granddaughters, Hailey Doucette and Sierra Doucette; two brothers, Peter Mehrer and David (Sandi) Mehrer; as well as numerous nieces, nephews and a large extended family. Elaine was predeceased by her parents, Edward and Elsie Mehrer. Elaine was born on December 17th, 1941 in Medicine Hat and spent her first eight years on the family farm at Hilda, Alberta where she also attended school. In January 1959, she moved to Medicine Hat and enrolled in the Garbutt Business School, while staying at her maternal grandmother’s home. Elaine worked in the offices of Tansley & Scholten Garage, which became Central Motors and then Reidy Ford. She met and married Louis Doucette on June 24th, 1961 and began their family. Over the years, they made four trips to visit Louis’ birthplace in PEI and took a trip to Hawaii where they had a wonderful experience. Elaine also worked as a bookkeeper at Hat Salvage & Steel and Soapberry Shop, spent several years working in the After-School program at Riverside School and later at the Bargain Shop. Elaine spent many hours enjoying nature, her Riverside yard and garden, birds and deer. Her time spent with her granddaughters was very precious to her. Elaine was very active in her church and bible study and was a long-time sponsor of World Vision. She will be missed by not only her family but by all those who knew and loved her. The Funeral Service will be held at VICTORY LUTHERAN CHURCH, 2793 Southview Drive SE, on Thursday, August 24th, 2017 at 11:00 a.m. with Reverend Jim Bredeson officiating. A private interment will take place at Hillside Cemetery. Memorial gifts in Elaine’s memory may be made to World Vision Canada, #1 World Drive, Mississauga, ON L5T 2Y4. Condolences may be sent through www.saamis.com or to condolences@saamis.com subject heading Elaine Doucette. Funeral arrangements are entrusted to