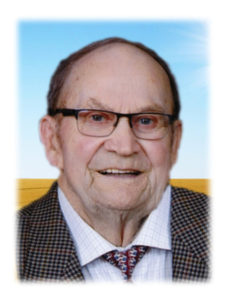 Mr. Donald Alexander Lacombe Fraser, passed away peacefully at the Bow Island Health Centre on Tuesday, August 22, 2017, at the age of 90 years. He is loved dearly by his wife, Clara and their two daughters, Beverley (Peter) Walker and their children, Brett (Renee) and Dawn; Carol (Don Schnell) Veilleux and her children, Bill (Leesa), Travis (Cary) and Grenner (Lauren Kennedy); several great-grandchildren; one sister, Jean Richards as well as numerous nieces and nephews who have continued to enrich Don’s life. He was predeceased by his parents, Paul and Ethel Fraser; brother, Dave (Rose) Fraser and brother-in-law, Lloyd Richards. Don was the third child of Paul and Ethel Fraser, brother to Jean and Dave. They lived in Medicine Hat and following graduation, Don surveyed several large irrigation projects in Southern Alberta. It was while working on a PFRA project in the Bow Island area that Don met and married Clara Thacker. They started a family and set up their first home in Seven Persons. In 1959, Don chose the farming life and he and Clara settled on the farm just outside of Bow Island where he resided until his passing. Don served his community well as he was involved in cubs, his church and whatever sports programs the “kids” were in. He was a caring, kind and gentle person who had a positive impact on all the lives of those around him. A Memorial Service honouring Don’s life will be held at St. Andrew’s United Church, 139 – 2 Avenue West, Bow Island on Saturday, August 26, 2017, at 2:00 p.m. with Pastor Lisa Waites officiating and a luncheon to follow at the Bow Island Legion. Private Interment will take place prior to the service. In lieu of flowers, memorial donations may be made to the charity of your choice. Condolences may be expressed by visiting our website at www.cooksouthland.com) Honoured to serve the family is