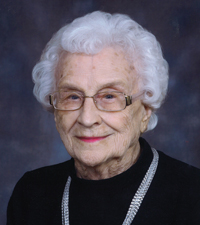 On Wednesday, August 23rd, 2017, Iva Dietrich passed away peacefully with her family around her, just a month after her 95th birthday. Iva was predeceased by her husband, George; and 9 brothers and sisters. She leaves to cherish her memory her son, Dwaine (Pat); daughter, Cynthia (Brian); grandchildren, Alexis, J, Christian (Jennifer), Damon (Jenna) and Kyla (Seth); and great grandchildren, Kaiden, Jace, Aubrey and Carter. Iva spent many happy years running her beauty shop in Maple Creek and later in life camping and fishing with George. Iva loved her family and was the hub for all information. If anyone needed a phone number or a birth date they called mom. Iva will be greatly missed by her friends, many nieces and nephews and other relatives who have kept in touch with her over these many years. Iva was also the cook in the family and would rather read a cookbook than a paperback. Vigil Rites (Prayers) will be held at SAAMIS MEMORIAL FUNERAL CHAPEL, 1 Dunmore Road SE, on Sunday, August 27th, 2017 at 7:00 p.m. The Funeral Mass will be celebrated at ST. PATRICK’S ROMAN CATHOLIC CHURCH, 238 – 2nd Avenue NE, on Monday, August 28th, 2017 at 11:00 a.m. with Father Philip Le, Celebrant. Interment will take place at 3:00 p.m. in the Roman Catholic Section at Hillside Cemetery. Memorial gifts in Iva’s memory may be made to A.J.‘s Loan Cupboard, P.O. Box 45006, MacKenzie Drug Post Office, Medicine Hat, AB T1A 0B1 or to the Salvation Army, 164 Stratton Way SE, Medicine Hat, AB T1B 3R3. Condolences may be sent through www.saamis.com or to condolences@saamis.com subject heading Iva Dietrich. Funeral arrangements are entrusted to