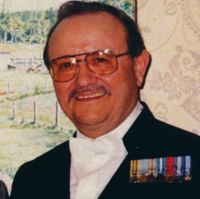 On August 1, 2017 Oscar John Joseph Lacombe originally from St. Paul, AB passed away peacefully ath the age of 88 years. Oscar served 27 years in the military,including the Korean War, earning the rank of Sergeant Major. He was the first Metis Sergeant of Arms for the Legislative Assembly and served with Speaker Gerald Amerongen and Speaker David J. Carter.He was the last surviving Charter Member of the National Aboriginal Veterans Association of Canada. Celebration of Life, 2:00pm, August 28 at tge Royal Canadian Legion, Kingsway Branch No. 175, 14339-50 St, Edmonton, AB