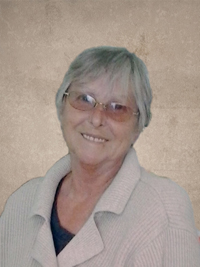 Donna Laverne Feasey, beloved wife of Brian Feasey of Irvine, passed away on Tuesday, August 22nd, 2017 at the age of 68 years. Donna also leaves to cherish her memory two sons, Edward (Tami) Feasey and Patrick (Corinne) Feasey; one daughter, Suzanne (Derek) Koenig; six grandchildren, Christopher, Alysha, Shelby, Cody, Sara and Chelsey; two great grandchildren, Brooklynn and Aunnah; one brother, James Jr. (Diane) Toole; one sister-in-law, Elaine Toole; as well as numerous nieces and nephews. Donna was predeceased by her parents, James and Mabel Toole; and one brother, Dan Toole. Donna was incredible loving, attentive wife, mother, grandmother and great grandmother and a loving sister. Always willing to invite you out to the “Funny Farm” to share a laugh and quirky smile and quick to lend a helping hand. She touched many lives through her volunteering with St. John’s Ambulance as an leader and instructor and The Rebecca Lodge. She always left a smile on other’s peoples face’s and a warmth in their heart. Those wishing to pay their respects may do so at SAAMIS MEMORIAL FUNERAL CHAPEL, 1 Dunmore Road SE, on Saturday, September 2nd, 2017 from 2:00 p.m. until 4:00 p.m. A private family time of remembrance will be held at a later date. Memorial gifts in Donna’s memory may be made to the Margery E. Yuill Cancer Centre, c/o Medicine Hat and District Health Foundation, 666 – 5th Street SW, Medicine Hat, Alberta, T1A 4H6 or to the Tom Baker Cancer Centre, 1331 – 29th Street NW, Calgary, Alberta, T2N 4N2. Condolences may be sent through www.saamis.com or to condolences@saamis.com subject heading Donna Feasey. Funeral arrangements are entrusted to