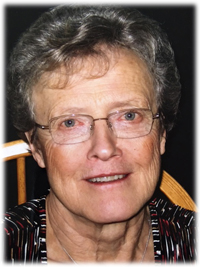 Ailleen Joyce Sather, beloved wife of Wayne Sather, passed away suddenly in Medicine Hat on August 29, 2017, at the age of 75 years. She is cherished and missed by all, including her two daughters, Melinda (Lee) Himbeault and Colette (Garth) Stark; four grandchildren, Nathan and Alyssa Himbeault, Jonathon and Hannah Stark and her sister, Lillian Bundus. Ailleen was the youngest of two girls born to Fred and Suzie Leib on March 26, 1942. She grew up on the family farm near Gibbs, Sask. where she helped with the farm chores and finished high school in Earl Grey, Sask. She completed her secretarial schooling in Regina and met Wayne in 1962. They were married on May 30, 1964 and grew their family to include two daughters. They moved to Assiniboia, Sask. in 1971 and lived there until retirement in 1987. Ailleen loved being a stay-at-home Mom and took pride in her daily routines of household chores, gardening and yardwork. She had a green thumb and the largest garden in the community. She was very active in the church community, volunteering for many groups and loved participating in social activities wherever she lived. Ailleen and Wayne lived in many communities after retirement and made many great friends along the way. She loved her card nights and jigsaw puzzles in her most recent home in Medicine Hat. Her biggest joy was watching her grandchildren play sports and she loved baking and cooking for them as they embarked on their own adventures. Ailleen was a cancer survivor and realized the importance of living every day as if it were her last. “Nana” will be forever remembered and missed by all those who knew her. The celebration of Ailleen’s life will take place at St. Peter Lutheran Church, 758 – 8 Street S.E., Medicine Hat on Friday, September 1, 2017, at 1:30 p.m. with Pastor Shane Hein officiating. As an expression of sympathy, donations may be made to the Canadian Cancer Society, #200 – 325 Manning Road N.E., Calgary, Alberta, T2E 2P5. (Condolences may be expressed by visiting www.cooksouthland.com) Honoured to serve the family is