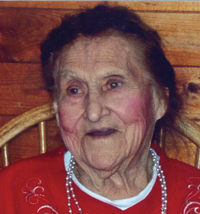 Bernice Dorothy Jans of Medicine Hat, beloved wife of the late Walter Jans, passed away on Saturday, September 2nd, 2017 at the age of 90 years. Bernice leaves to cherish her memory her son, Dale (Lori) Jans of Schuler; her daughter-in-law, Isabel Jans (Earl Westergreen) of Medicine Hat; ten grandchildren, Jolene (Trevor) Warburton, Bryce (Laura) Jans, Gerritt (Ashley) Jans, Kurtis (Stacey) Jans, Adele (Jon) Hider, Chad Johnson (Jessica), Naomi Johnson (Lawrence), Lisa, Cecelia and Jason; ten great grandchildren, Tenley, Tripp, Kyptan, Kaelyn, Masen, Emeree, Ethan, Eve, Gustus and Shyra; one brother, Bob (Terry) Zieffle of Medicine Hat; one sister, Betty Eremenko of Maple Creek; as well as numerous nieces and nephews. Bernice was predeceased by her husband, Walter Jans; two sons, Rodger Jans and Derry Jans; her parents, Jacob and Justina Zieffle; and one brother, Harry Zieffle. Bernice was born and raised in the Walsh district and received her education at Box Elder School. She married Walter at the Church of God in Medicine Hat on November 9th, 1946. Together they farmed south of Walsh until 1956, when they moved and farmed at the Bull Trail, south of Irvine. In 1985, they retired to Medicine Hat. Upon retiring, Bernice and Walter enjoyed family time, camping and traveling. After Walter’s passing she and her lady friends spent many hours visiting and playing cards, going for drives in the country and just enjoying life. Thank you to these special ladies! You know who you are. Bernice enjoyed cooking for her family, using a little of this and some of that method. We’ve learned a lot but most of us still need a cookbook. She was a member of the New Horizon Club in Irvine. Age slowed her mobility but she always had a sharp mind. She could remember dates and events far better than most of us. Bernice lived in her home until her passing because she never wanted to live anywhere else, she had everything she needed and wanted there. She will be missed by her family and many friends. Those wishing to pay their respects may do so at SAAMIS MEMORIAL FUNERAL CHAPEL, 1 Dunmore Road SE, on Wednesday from 7:00 until 9:00 p.m. and at VICTORY LUTHERAN CHURCH, 2793 Southview Drive SE, on Thursday from 9:30 until 10:25 a.m. The Funeral Service will be held at VICTORY LUTHERAN CHURCH on Thursday, September 7th, 2017 at 10:30 a.m. with Reverend Jim Bredeson officiating. A private interment will take place at Saamis Prairie View Cemetery. Memorial gifts in Bernice’s memory may be made to the charity of your choice. Condolences may be sent through www.saamis.com or to condolences@saamis.com subject heading Bernice Jans. Funeral arrangements are entrusted to